Djokovic ‘motivated as ever’ to return to his very best

Novak Djokovic confessed to being as ‘motivated as ever’ as he looks to rediscover his very best form and add to his incredible title haul.

The world No. 2 has had mixed results over the last 10 months and has not reached a final since he lifted the trophy in Doha at the beginning of the year. However, he arrived in Rome pleased with his performance last week in Madrid and believing his results there, which culminated in a semifinal finish, were ‘a step in the right direction’.

“Of course I am still not playing as well as I can, but that’s a good thing, in a way, because you know that there is still room for improvement. So I keep on working daily and I keep on trying to perfect my game, get it to a higher level,” said the 12-time Grand Slam champion. “Hopefully this week things will come together even more.” 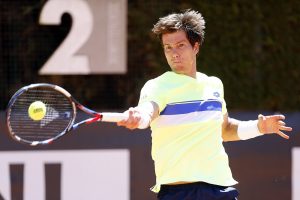 Djokovic will get his 2017 Internazionali BNL d’Italia campaign underway on Tuesday against Great Britain’s Aljaz Bedene, who has been in great form of late having won 27 of his last 30 matches. The qualifier was leading wild card Gianluca Mager 67(3) 64 3-0 in the first round when the Italian was forced to retire due to cramping.

“He’s a very capable player on this surface. Very quick, very talented. Obviously I have respect for anybody that is across the net, and that will not change, especially for someone that is in form like Bedene,” said Djokovic.