Halep and Svitolina to battle for Rome glory

Simona Halep and Elina Svitolina will meet in the final of the Internazionali BNL d’Italia on Sunday as they both bid to lift the trophy at the Foro Italico for the first time.

It is a fourth final this year for the Ukrainian, who has triumphed in Taipei City, Dubai and Istanbul and leads the tour for most overall wins in 2017. For Halep, who has had most success of all the players on clay this season with 30 victories, it is a second final in as many weeks having lifted the trophy in Madrid last Sunday.

It might be a clash between two of the most successful players on tour this year but playing the final in Rome is new ground for both of them. Halep’s previous best result in the Eternal City was reaching the semifinals in 2013 and 2015, while Svitolina had not advanced beyond the second round prior to this year.

“It’s a final, so of course I’m already very proud of my performance here. I played very, very good here and very, like, focused,” said Svitolina.

“So I will try to do the same thing and hopefully, yeah, it will be a good day. Of course, she won Madrid and she has confidence. But I’m also playing good this year, and I think it’s gonna be a good match.” 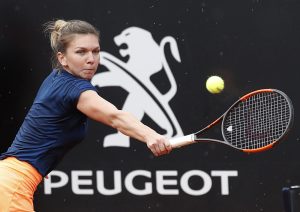 The two players have met just once before when Halep defeated Svitolina at 61 61 at the Tournament of Champions in Sofia in 2013.

Halep will remain at No. 4 in the rankings regardless of whether she wins the final or not, while Svitolina has returned to the top 10 as a result of her performance this week.

“I expect a tough one. It’s final, come on. It will be very difficult. You know, I believe that I have my chance even if they are confident, very confident now,” said the Romanian.

“I am confident, too, so I have my chance. For sure, I will not give up. I will go through the match and I will fight for every ball.”