Murray and Djokovic to get Rome campaigns underway on Tuesday

Andy Murray and Novak Djokovic will both be in action on day three at the Internazionali BNL d’Italia as they take on Fabio Fognini and qualifier Aljaz Bedene respectively.

Defending champion Murray, who celebrated his 30th birthday on Monday, will play the Italian world No. 29 in the second night match on Centre Court. The pair has played five times before with Murray wining three of those encounters, although the duo has split their two clay meetings.

Djokovic will be hoping to extend his unbeaten record against Bedene when the pair meet in the third day match on Centre Court. The Serbian has emerged victorious from both of their previous match-ups but won’t be underestimating Bedene who is full of confidence having enjoyed a successful run of form recently which has yielded 27 victories from his last 30 matches.

Centre Court welcomes Maria Sharapova back for a second straight day as she returns to contest her second round match in the opening night session. Her opponent will be No. 16 seed Mirjana Lucic-Baroni, who defeated Lucie Safarova on Monday. 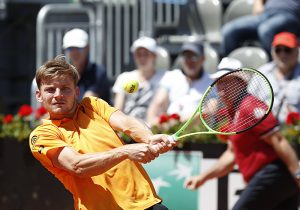 David Goffin, the No. 9 seed, fought back from a set and a break down in his opening match against Thomaz Bellucci on Monday and could face another tricky encounter on Tuesday when he plays Spain’s Fernando Verdasco.

Last year’s finalist Madison Keys is also in opening round action as she takes on qualifier Daria Gavrilova, while top 10 seeds Johanna Konta, Marin Cilic and Svetlana Kuznetsova also take to the courts for their matches against Yulia Putintseva, Ryan Harrison and Katerina Siniakova respectively.