Reigning Internazionali BNL d’Italia champion Andy Murray is envisaging a difficult opening match when he faces Fabio Fognini in the second round at the Foro Italico.  Murray is aware that he will need to be in good form if he is to get the defence of his title off to a positive start.

“He’s one of the better clay-court players, for sure. He obviously would be highly motivated, I would think, playing in Italy, as well,” said the Brit, who celebrates his 30th birthday this week.

“I have had some tough matches with him in the past, so it won’t be easy. I will definitely need to play well in that one to have a chance of winning. But, yeah, that’s definitely a tough one to start off.” 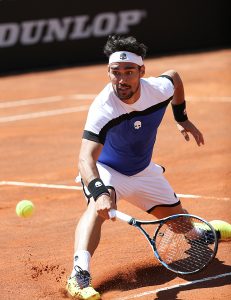 Murray has won three of the five matches he has played against the Italian but the pair has split their two clay court encounters. Murray triumphed at 2009 Monte Carlo but Fognini emerged victorious when they met in the 2014 Davis Cup World Group quarterfinal in Naples.

Neither player has enjoyed as much success as they would have liked so far during this clay court season and will hoping they can turn their fortunes around this week with Roland Garros on the horizon.

World No. 1 Murray lost in the third round at both Monte Carlo and Madrid but reached the semifinals at Barcelona, while Fognini recorded just the second clay court victory of his season on Sunday when he defeated compatriot Matteo Berrettini 61 63 in the first round here.