Elina Svitolina fought back from a set down to stun Simona Halep 46 76 61 and win her first Internazionali BNL d’Italia title at the Foro Italico on Sunday.

In a compelling final which was full of twists and turns, it was Svitolina who was able to put a slow start behind her and get across the finish line first, eventually prevailing in two hours and seven minutes to win her fourth title of the year. Halep started strongly but as the match progressed she began to be hampered by an ankle injury which occurred in the opening set and was unable to maintain her level.

“I needed to be patient, first of all, because she gets lots of balls back, makes you miss, like, some easy shots when you’re under pressure. So this is her game,” said Svitolina. “She really dominates sometimes very, like, playing very strong. Then I needed to be patient and waiting for my opportunity and then do something with it.”

The Ukrainian was off the pace early in the opening set, struggling to stay in the long baseline rallies and committing too many errors. She found herself 5-2 down before a timely chat with her coach, who encouraged her to step in and take control of the rallies, helped to focus her mind. She promptly recovered one of the breaks to close the gap to 5-4 although she was unable to prevent Halep from serving it out at the second time of asking, despite the Romanian having rolled her ankle towards the end of the set. 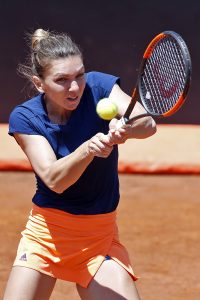 Halep was off to a flyer once again at the start of the second set, breaking Svitolina immediately thanks to some well-time backhand winners. Svitolina stepped up a gear and broke back straight away before edging 3-1 ahead thanks to some aggressive play. Some loose errors cost her in the fifth game as the Madrid champion drew back level but it was the No. 8 seed who moved ahead for 5-3 after capitalising on some errors from her opponent. More breaks of serves ensued before Svitolina was able to serve it out and force a decider.

The momentum stayed with Svitolina in the third set as she raced to a 5-0 lead as Halep’s movement deteriorated and she struggled to make balls. Some serve and volleying in the sixth game helped the Romanian avoid a final set bagel but she couldn’t stop Svitolina from serving out the match and claiming the title.

“At 5-3 in the second set, when I turned to hit inside out forehand, then I felt again [the ankle]. That’s why I called to tape it, because I was scared not to do something worse,” said Halep.

“I never like to give up during the match. I don’t want to stop the matches. So I just wanted to try to win the second set. I couldn’t. So then it was too bad to go through. So I said that it’s better to calm down.”