With only a few days to go until the start of the 2017 Internazionali BNL d’Italia many of the world’s top tennis players have begun arriving in the Italian capital and the clay courts at the Foro Italico have started to see some action.

One of the first up on a sun-drenched Campo Centrale this morning was three-time champion Maria Sharapova, who enjoyed a 90-minute practice session in front of several hundred members of the public. Following her was former Italian Open finalist and world No. 3 Stan Wawrinka, while home favourite Roberta Vinci and last year’s runner-up Madison Keys are scheduled to practise on the same court later this afternoon. 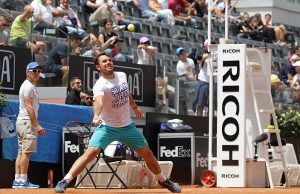 Venus Williams was another former winner who hit early today as the 1999 champion started her practice session on Campo 5 at 9am. World No. 5 Dominika Cibulkova, who has battled with a wrist injury of late, was in high spirits on Campo 3 at lunchtime as she hit with Christina McHale.

The gates are open to the public which allows fans, including many schoolchildren, the chance to watch some of their favourite players in the more relaxed atmosphere of a practice day. Friday’s practice schedule is available to view on the website and tickets cost 7€.

The draw for the 2017 Internazionali BNL d’Italia takes place at 6.30pm this evening at Arco di Constantino and you can follow it live on Facebook.