Djokovic through to face Thiem

Novak Djokovic prevailed in his rain-interrupted quarterfinal against Juan Martin del Potro to reach the semifinals at the Internazionali BNL d’Italia.

The Serb was leading 61 1-2 when the match was suspended on Friday evening due to a huge thunderstorm which deluged the court and he returned on Saturday to wrap up a 61 64 victory in one hour 34 minutes. 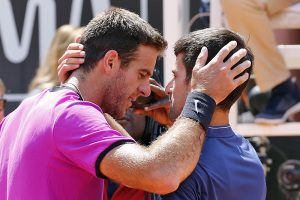 Djokovic’s tactic of attacking the del Potro backhand and keeping him back behind the baseline paid dividends throughout the match and the world No. 2 looked convincing as he advanced to the last four for the eighth time at the Foro Italico.

The 12-time Grand Slam champion will return to Centre Court later on Saturday to face Dominic Thiem in his semifinal match. He holds a 4-0 win-loss record over the Austrian.