Garbine Muguruza against Victoria Azarenka and Denis Shapovalov versus Grigor Dimitrov are just two of the exciting quarter-final match-ups scheduled for day six at the Internazionali BNL d’Italia.

Azarenka leads the head-to-head against Muguruza 2-1 although two of those matches have ended in retirement, including in the third round at the Italian Open last year when the Spaniard suffered from a left thigh injury. Their only completed match took place at 2016 Miami, Azarenka winning that one on her way to lifting the trophy.

Both players have been in incredible form of late, Muguruza has reached the last eight in six of the seven tournaments she has contested this year while Azarenka has won 14 of her last 15 matches, setting the stage for a mouth-watering encounter between the two Grand Slam champions on Court Pietrangeli.

Shapovalov and Dimitrov will battle it out for a semi-final place later on the same court. The Canadian has yet to defeat the No.15 seed, trailing their head-to-head 2-0, but will be confident of turning the tables given his current run of form which saw him reach the quarter-finals at the US Open last week.

Top seeds Simona Halep and Novak Djokovic are in quarter-final action on Court Centrale. Halep faces Putintseva in the opening match as she hopes to stay in the hunt for her first Rome title, while Djokovic will take on Dominik Koepfer, the first qualifier to reach this stage at the Foro Italico since 2009, in the second. 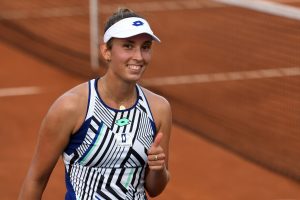 The night session will pit defending champion Karolina Pliskova, who is on a seven-match winning streak at the Italian Open, against No.11 seed Elise Mertens, who leads the Tour for match-wins in 2020 with 26, in another intriguing clash before nine-time Rome champion Rafael Nadal will take on No.8  seed Diego Schwartzman. The Argentinian will be hoping he can claim his firs victory over the world No.2 at this 10th attempt.

The remaining two match-ups will see home favourite Matteo Berrettini, the No.4 seed, take on Norway’s Casper Ruud, who has reached the quarter-finals at a Masters-1000 event for the first time, in the first match on Court Pietrangeli, and two-time Italian Open champion Elina Svitolina play either Roland Garros finalist Marketa Vondrousova or Polona Hercog in the third match on the sunken court.

Play gets underway on all courts from 12 noon.