21.20 – Center court is ready to host the latest match of the day between the seed number 2, Caroline Wozniacki and seed number 15, Anastasja Sevastova.

21.16 – Novak Djokovic continues to play towards some of his older form and continues to move in the right direction, with a straight-sets win over Albert Ramos Vinolas 6-1 7-5. Tomorrow not before 4pm on center court, QFs against Nishikori. For the women’s tournament, Caroline Garcia beats Sloane Stephens 6-1 7-6(7). Next round will face world number 1 Simona Halep for a spot in the semis.

19.57 – On Center court it’s time for Novak Djokovic. The 4-time Rome champion is leading 3-0 against Albert Ramos Vinolas, who is survived from a thrilling match against John Isner on Round 2. Stephens and Garcia are on court Pietrangeli, Nishikori and Kohlschreiber on Next Gen Area.

19.35 – “What was the difference, biggest difference, between this match and the one you played against him in Canada?” this was the first question asked to Nadal in his press conference after the match won against Shapovalov. He said:“The surface, I think, probably the most important. It was a solid match for me. I started with some mistakes on the return. Because with my serve, I didn’t lose many points. But on the return at the beginning, I really think that he was serving big. And I had couple of mistakes with the return, so it takes a while to have the break. That’s the other thing. I had 15-40 on break points, and then I had again 15-40 on some more break points. So, it was a few opportunities missed in that moment. But then, was very positive that I make the break in the 3-all. And then the match changed — Well, the match didn’t change a lot because, with my serve, I continually were winning the serves, more or less, comfortable way. But, in terms of the return, probably he stopped a little bit to serve that big. And I was a little bit more relaxed, and I was able to not have more mistake with it, too.”  About tomorrow’s match against Fognini: “I’m going to prepare the match like every day. Just try to be ready for the match. It’s another match, quarterfinal match. Every day the matches are becoming more important, of course. But, that’s it. It’s a match against a great player with big talent. And I know I have to play well to keep having chances to keep going on the tournament. I hope to be ready for — to make that happen, to play at the right level to be competitive and try to find the way to have my chances.”

19.00 – Sharapova gets the first set with a powerful forehand winner, 6-3 against Daria Gavrilova. 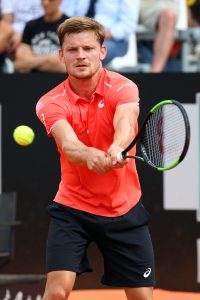 18.30 – David Goffin meets the press after the victory due to the retirement  of Juan Martin Del Potro: “I started the match really well. I played really good tactic, making him run a lot from both side. Going to his forehand on the right shot and staying on his backhand. A lot of first serve.” About Del Potro’s injury:“I don’t know what happened. All of a sudden in the second, he felt something. I don’t know where, leg or the back or I don’t know because I didn’t see the treatment. Then when he came back, he started to play well, to play full, to try to come back in the match, to stay solid. And he can be really dangerous when he’s like that. I saw so many matches when he did the same. Always he looks like tired, but he’s not. And he’s really dangerous in that case. So I tried to stay there. I tried to come back, as soon as I lost my serve. But it was great intensity in the second, with some great point. I was feeling much better physically. I was running really well. I was feeling really, really, really great. I was surprised when he stopped at 5-4. But probably he felt second time something in his leg”.

18.10 – Second straight match in which Zverev breaks at 5-5 and serves out a 7-5 set. This time against Edmund, they’re playing on Pietrangeli’s court.

18.08 – Before entering the court to challenge Sloane Stephens, a fun time in the #ibi18 Social Room is what Caroline Garcia needs! 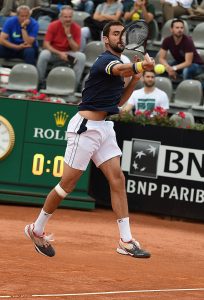 17.23 – 441th victory on clay for Rafael Nadal who beats Denis Shapovalov 6-4 6-1 in 1h and 22m. Great tournament though for Shapovalov who will become the new Canadian #1 on Monday. Nadal will face Fognini tomorrow in QFs.

16.40 – Solid start from Cilic, first set 6-3 against Benoit Paire. Nadal and Shapovalov are now on court Centrale; Rafa leads 5-3 with a break.

14.26 – The great day at #ibi18 continues. On center court Venus Williams (9 WTA), at 14th appearance at Rome, is trying to get a revenge against Anett Kontaveit, 26 WTA, who beat her in 1st round in Madrid last week.

14.13 – Preparing for his 2nd career match against Rafael Nadal: Denis Shapovalov is getting ready for an epic battle!

13.01 – After being down 4-2 with a break Fabio Fognini wins 4 games in a row against the german Peter Gojowiczyk (53 ATP), 6-4 first set. Svitolina survives a scare against Kasatkina, winning 0-6 6-3 6-2. Will play either Sakkari or Kerber in the QFs. Konta and Ostapenko are at 3rd set. 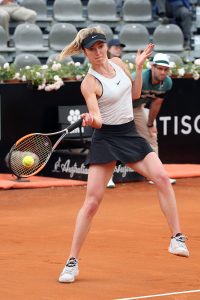 12.05 – Konta takes first set 6-2 over Ostapenko. Svitolina after a bad start, losing first set 6-0, is now up 5-3 on 2nd against Kasatkina. On center court it’s the time of Fognini vs Gojowiczyk.

11.21 – Beautiful weather today at Foro Italico. The first news of the day is the withdrawal of Madison Keys due a back injury. On Next Gen the defending champion Elina Svitolina (4 WTA) faces Daria Kasatkina (13 WTA). The 2017 Roland Garros champion, Jelena Ostapenko (6 WTA) is playing against the britain Johanna Konta (22 WTA). Due to the withdrawal there are some changes to the schedule: The doubles match Babos/Mladenovic vs Errani/Trevisan moves to the Pietrangeli instead of Keys – Halep. On Court 2 Sakkari vs Kerber is not before 1.30pm. Keys also withdraws from the doubles tournament, she was playing together with Venus Williams. Atawo/Groenefeld moves to next round.