20.57 – Nadal won 6 games in row after being down 0-1 in the first set, then lost the second 6-1:“What happened is I played one of the best sets that I played on clay this year. First set was fantastic, in my opinion, in terms of everything. Feeling, good shots, tactically, everything was great. Returning great. All the things that I wanted to do happened. So, it was a great set. Then in the second, couple of things happened. First thing I was, I believe, not like in the first game of the second set. I had a chance to have a break. Because I brought in the 30-all, I brought a great return. He made a drop shot from nowhere, being honest. A drop shot that probably doesn’t exist. But, he make it. And he make it great. Then he break me, and then the things went quick.  I had balls to be 3-1, but I didn’t convert it. Then I had love-30 to be 5-2 but didn’t convert it. The court was slower later. The beginning was hot, fast conditions, bounces higher. So, that helps a little bit more my game. And I was feeling great. Then the beginning of the second, it started to be much more cloudy, the game became slowly, and probably he started feeling better the ball. And I stopped doing the things that I needed to do. I’m lucky that I started to do it again. Not too late.” But exactly what changed in third set? ” I had to change something because, in my opinion, he was taking advantage from inside. In the first set, I was able to open the court against him, to change the rhythm of the point with the slice, hitting high balls, going for the winners. I did great. Then the court become slower, so I started to hit, trying to hit with a lot of topspin. But the ball stays heavier, so the bounces were lower. I take a while to understand again what’s going on. Then I made a little bit the tactical error at the end of the match that I made at the beginning. Hitting probably without accelerating the match, because the ball didn’t get that many topspin later when the conditions became slower.  I didn’t play no one day with that conditions here. I play all the days during the day. So, when it started to be cloudy and when it started to be slower, for me it was new feelings. Different to all the things that I felt during the week. Especially on the return. I felt at the beginning I was hitting long enough and I was taking advantage of that. Then, I felt even with his second serve, for a while, I was not creating no one advantage. Completely the opposite. The second serve, he was able to hit the first ball with perfect position. And I was just running to save the points. When I came back, I believe I started to return again much higher and longer. And then everything changed then.” 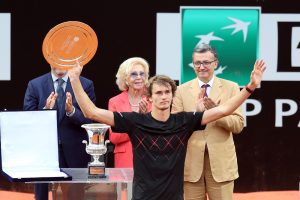 the title:“Not today, it wasn’t. But, it happens. You know, there’s nothing I can do about it. Next time, I have to find a way to come out better after the rain and play better tennis. He came out way faster and played much more aggressive than I did. The fatigue I had because of the successes of last few weeks, it took me very long time to get activated again and to get going. Obviously, it wasn’t enough time.”  Talking about the successes of the last few weeks:“I think this week is the most, actually, satisfying. Because even when I was tired, I still found a way against great players. And this is not easy to do. This is one of the biggest tournaments that we have in the world. So, you know, finding a way to get to the finals after, you know, two tournaments that I won is something amazing for me, I think. I was not far away from beating Rafa on a clay court in a Masters final. So I guess I can take that into Paris.” 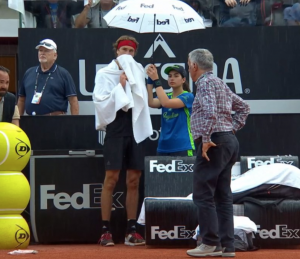 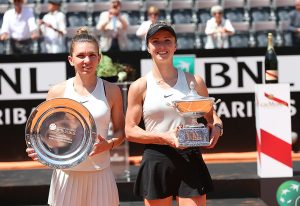 17.29 – Elina Svitolina talks about his victory against Simona Halep, today in the final:“It was a really good match, from my side. I think I dominated all the match. I was trying to put lots of pressure on Simona with my game, tried to really take the ball early and to, you know, open the court. It worked really good today. I was feeling good”. Now it’s to think at the Roland Garros:“It’s gonna be different, definitely, from the last year. Last year, I was almost first time for me going into the Grand Slam as a favorite. This year, it’s different. I also was hoping  was one of the favorites. For me is very important to take one match at a time and just, go out there and enjoy playing on the big courts, atmosphere. Roland Garros is what we are training for. And I’m gonna give it the best shot.”

16.51 – Rafael Nadal wins six straight games after his serve was broken by Zverev in the first game. Takes the first 6-1, one win away from the 10th title at Rome.

14.37 –  At 4pm Nadal and Zverev will play on center court the men’s final. It will be a battle between the two most recent ATP Master 1000 champions. Nadal leads the head-to-head record 4-0, and has won all five of the sets the’ve contested on clay, including a three-set victory in a Davis Cup quarter-final between Spain and Germany earlier this year. 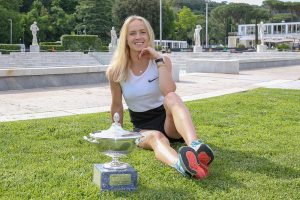 14.27 – Rome title successfully defended by Elina Svitolina. She beats World number one Simona Halep 6-0 6-4 to capture the Rome Masters title for the second time in two years. Third title of the year for her (Brisbane, Dubai, Rome).

14.04 – Svitolina is 4-3 up with a break in the second set but Halep is starting to play more aggressive, after the medical treatment received.

13.15 – The revival of 2017 final Halep vs Svitolina is on court now. Great start for Svitolina who is leading 3-0 with double break. The defending champion has won 12 of the first 18 points. Ashleigh Barty and Demi Schuurs beat Barbora Strycova and Andrea Sestini Hlavackova by 6-3 6-4 and win the Internazionali BNL d’Italia WTA Doubles title