Fabio Fognini, Sofia Kenin and Johanna Konta will get their Internazionali BNL d’Italia campaigns underway on Thursday at the Foro Italico.

Home hope Fognini will begin his quest for a first Italian Open title against Ugo Humbert on Court Centrale following the conclusion of the matches between No.12 seed Denis Shapovalov and qualifier Pedro Martinez, and No.9 seed Garbine Muguruza and 16-year-old American Coco Gauff. 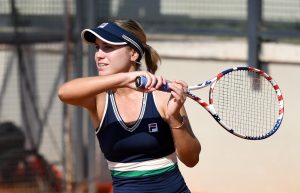 The night session will see Australian Open champion Sofia Kenin takes on Victoria Azarenka in what is sure to be a scintillating encounter before Italian qualifier Lorenzo Musetti, who stunned Stan Wawrinka on Tuesday, plays Kei Nishikori.

Court Pietrangeli will host the match between last year’s runner up Johanna Konta, the No.7 seed, and Romanian qualifier Irina-Camelia Begu, who also has pedigree in Rome having reached the semi-finals in 2016, when they meet for the first time.

No.5 seed Kiki Bertens returns to action for the first time since February when she takes on Polona Hercog on Court Pietrangeli while No.5 seed Gael Monfils will also be in action on the same court when he faces qualifier Daniel Koepfer.

Play gets underway at 11am on all courts.