00.55 – In a very quick press conference Sascha Zverev talks about his opponent Matteo Berrettini and also about his performance: “He’s playing great. I think, if he continues playing like this — I hope his ankle’s okay — he’ll get further in the rankings. I think he’ll be top 100 next week. So, you know, he has a great future. Me, it’s not easy to come from Madrid, where there’s a lot of altitude, it’s very fast, to here. So, I only had basically one day. And for that, I thought I played well. Still, I had some adjustments to do in the first set. But then, once I got going in the second set, I thought I played great.”

00.46 – Garbine Muguruza and Daria Gavrilova are at the 3rd set. A beautiful battle during the night. First set Muguruza 7-5, second set Gavrilova 6-2. 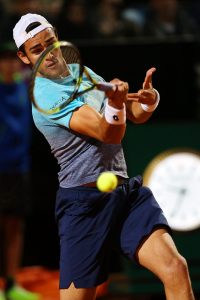 Berrettini. 3rd round tomorrow with Edmund. Denis Shapovalov (29 ATP) beats Robin Haase 7-6(3) 6-7(5) 6-3 and will be the next opponent of Rafael Nadal on R3. Now on court the last match of the day: Muguruza vs Gavrilova.

20.45 – Good debut today for Juan Martin Del Potro who defeated the Next Gen Stefano Tsitsipas on court Pietrangeli. This court is the favourite from the players: “It’s a great atmosphere on that court. All the players like to play in Pietrangeli court. And we feel the fans pretty close to us. And they create a good atmosphere. They make their own game, beside our game. I will play the same court tomorrow, which is nice for me”.  Speaking his opponent: “I think he has a big potential to keep improve his game. He plays really, really good match at the beginning of the match today. I think he has everything to win, even better in the future. I like the way of his game. And he have all the potential to be dangerous for us in the future.” 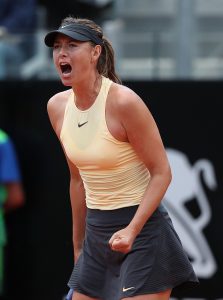 18.51 – Nadal meets the press and talks about his easy win against Dzumur: “A positive match, of course. Good start here. It is important, after a loss in Madrid, it’s important to come back strong. And that’s what I did today. I went on court with the right intensity. I don’t know how many mistakes I did, but not much. And having the control, more or less, of a high percentage of the points. So that was the way that I want to play. And today was a positive day, of course.”  The day after the loss in Madrid he didn’t play: “I took one day off. And I flew the next day later here to Rome to sleep here and to have the chance to practice on Sunday.” He also speaks about the funny hitting with Maria Sharapova: “It was a great feeling. She has a great intensity. It was a great feeling. It was a good experience.” 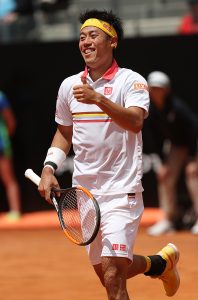 15.52 – Anett Kontaveit (26 WTA) reaches the 3rd round with a win over the russian Svetlana

15.32 – Fabio Fognini is very happy for the win today against Dominic Thiem: “I played a good match, in the second set I didn’t played well and when I was down 5-0 I was already thinking about the 3rd set where I raised my level and tried to be more aggressive especially on return.”  Also Thiem commented the match: “It was a good match, actually, from both of us, I would say. Was a very intense fight, basically from the beginning to the end. So I’m disappointed that I lost, obviously. But game-wise, I’m not really disappointed. I mean, there would have been chances to win the match. If you compare it to last year or to Madrid there was, as well, a lot of close matches which I could have lost. And today, it happened. And he played well. The whole match was good. So, it’s a loss which is not too painful, which is just, motivating me for next week.” 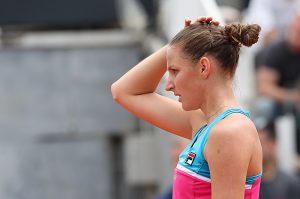 Pliskova believes to be in is called out and then there is some confusion over which mark the ball made. The supervisor is called but the call stands, much to Pliskova’s fury as it gives Sakkari advantage and break point at  a crucial stage of the match. Pliskova loses that game and after, the match, then she destroyed the umpire’s chair. Final score 3-6 6-3 7-5, Sakkari into round 3.

13.12 – Training time also for Maria Sharapova. She will play the 4th match on center court today against Dominika Cibulkova.

12.59 – Fabio Fognini (21 ATP) takes the first set 6-4 over seed number 6 Dominic Thiem, playing very aggressive and with an unusually high number of backend winner. John Isner after winning first set 7-6(5), lose  the second, 7-6(2), against Ramos-Vinolas. Caroline Garcia (7 WTA) beats 6-3 6-4  Timea Babos (38 WTA) and waits at round 3 Stephens or Kanepi, whom are playing the third set now on Next Gen Arena. Meanwhile Rafa is practising for his match against Damir Dzumhur (31 ATP). 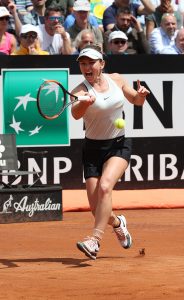 12.15 – Number 1 seed Simona Halep exact revenge on Naomi Osaka (21 WTA) winning 12 games in row, 6-1 6-0. Halep wanted to forget the defeat suffered in semifinal match at Indian Wells where Osaka won 6-3 6-0. After the match the world number 1 said: “I’m feeling good, Pietrangeli is my favourite court, I tried to be aggressive and reduce the number of errors. I love Rome and I love to play here.”

11.00 – The sun’s shining over the Foro Italico and the players are ready to battle. Day full of beautiful matches. World No. 1’s Rafael Nadal and Simona Halep, defending champion Alexander Zverev and Grand Slam winners Caroline Wozniacki, Garbine Muguruza and Venus Williams are just some of the names in action on a blockbuster day at the Internazionali BNL d’Italia on Wednesday.