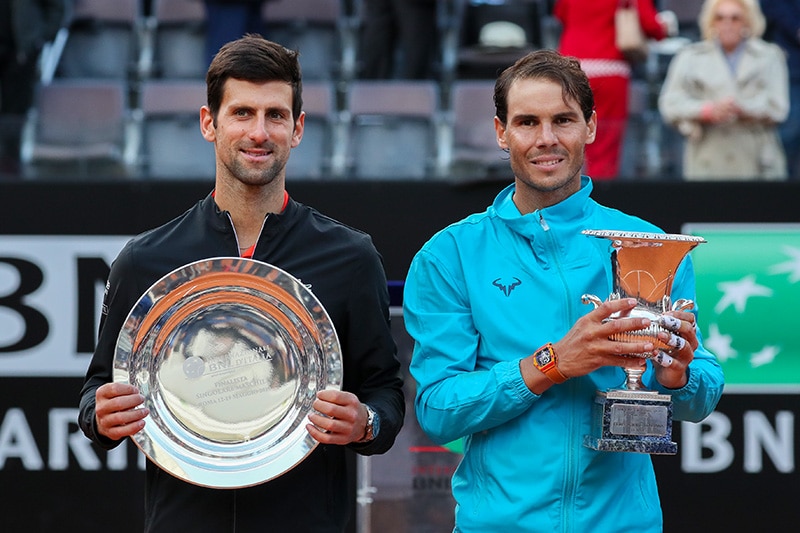 The 77th edition of the Internazionali BNL d’Italia will take place from the 14th to the 21st of September (with qualifications starting on Saturday 12th) at the Foro Italico of Rome. Both finals are scheduled to take place on Monday, instead of the usual Sunday finale. This year the tournament is celebrating its 90th birthday and it is taking place thanks to the joint-venture between the Federazione Italiana Tennis (FIT) and Sport e Salute SpA, with BNL Gruppo BNP PARIBAS as the title sponsor for the 14th consecutive year.

The event has been presented at the Olympic Stadium of Rome at the attendance of numerous authorities: FIT President Angelo Binaghi, the major of Rome Virginia Raggi, the president and CEO of Sport e Salute Vito Cozzoli, the president of the BNL Gruppo BNP Paribas Luigi Abete, and Nicola Pietrangeli, president of the “Comitato d’Onore” and ambassador of Italian tennis in the world. The minister of Youth Policies and Sport, Vincenzo Spadafora, could not attend due to institutional businesses, but he submitted a note in which he underlined the importance of this tennis event.

ANTICOVID-19 MEASURES – The tournament will take place without spectators being allowed on site, following the specific veto from the “Comitato Tecnico Scientifico” (Scientific Technical Committee), that has been adopted by the whole region, Lazio. As for the participants, male players will be tested every 4 days starting from their arrival in Rome, as per ATP protocols, while women players will be tested every 5, as per WTA dispositions. There will be two hotels, one for male and one for female players, and all players will have to remain by their accommodation for all time outside of their permanence at the Foro Italico. To guarantee the most possible prevention, a partnership between the tournament and the Policlinico Gemelli has been put in place and the famous hospital will have a dedicated spot inside the Foro Italico by the Sala delle Armi.

A STELLAR LINE-UP – The men entry list features 19 out the best 20 players in the world rankings. This means, it includes the world number 1 and 4-time winner in Rome, Novak Djokovic, world number 2, 9-time winner and 11 time finalist at the Foro, Rafael Nadal, and world number 3 Dominic Thiem, whose talent on clay has been proved plenty times, including a final in the last edition of the Roland Garros. The only forfeit has been the one of Roger Federer, who will only comeback to tennis in 2021 following a knee surgery. Among the numerous contenders, there is a number of young promises: world number 5 Andrei Medvedev, world number 6 Stefanos Tsitsipas and world number 7, trophy winner in 2017 and finalist in 2018 Sasha Zverev. Local hopes are obviously set on Matteo Berrettini, who is at home in Rome, and comes strong of his 8th place in the ATP rankings; Fabio Fognini, currently sitting at number 11, is also set to play at the Foro Italico returning from a successful ankle surgery. The Italian will aim to shine on home ground after having become the first man from his country to win a Masters 1000 in Monte Carlo last year.

The women tournament, a Premier 5 event, features an even stronger entry list than the US Open: with 9 out of the best 10 players in the world and 40 out of the top 43!

On the women’s side, Camila Giorgi, Jasmine Paolini and Elisabetta Cocciaretto have been given a wild card for the main draw, just like Victoria Azarenka and Venus Williams, who could benefit of the top 20 wild cards. Sara Errani, Martina Trevisan, Giulia Gatto Monticone and Jessica Pieri have been assigned the 4 wild cards reserved for the qualifications.

A NEW RULE – Ever since 2011, the tournament has been held as a “combined” with men and women draws taking place at the same time and matches from the two alternating within the same day, just like for the Slam tournaments. The men draw will have 56 entries, with the top 8 seeds receiving a bye in the first round, just like the 4 semi-finalists of the US Open (if not already among top 8 seeds). The direct entries to the main draw are 36, 8 will be the qualifiers, 4 the wild cards and there are 8 more spots reserved to “special exempts”, including 4 for the semi-finalists of the US Open. This is the new rule adopted by the ATP as, for the first time in its history, a Masters 1000 is following a Slam (US Open will end on Sunday 13th September). This solution will allow players who reach the semi-finals in New York to arrive in Italy and have a few days to train and test the local conditions before playing their first match.

NEW SPONSORS – Next to the traditional sponsors, this year the tournament is proud to present a few new and prestigious partners: BMW, Valmora and Italgas. These highly valued brands will contribute to the growth of the Internazionali BNL d’Italia, especially when it comes to the transportation. This year, indeed, the fleet of the tournament will be strong of 100 BMW cars. Rolex, Australian, Dunlop, Emirates, FedEx, Algida, Powerade, Ricoh, EMU, Trenitalia, Ticketone are all confirmed from the past year.

MAXIMUM TV COVERAGE – Even if tennis enthusiasts will not be able to attend the tournament in person this year, TV coverage will provide a fantastic experience, thanks to an unprecedented production. An agreement between Italian Sky, who owns the rights for ATP, and SuperTennis, owner of WTA rights, will allow fans to enjoy the full night session scheduled on Campo Centrale (one men and one women match per day) on both channels. SuperTennis will also simulcast two quarter-finals, all semi-finals and the finals of both tournaments. For all the other matches, the regular subdivision will be in place with ATP on Sky and WTA on SuperTennis.

WEBSITE, APP AND SOCIAL – Digital channels will enhance the fan experience: the official website (www.internazionalibnlditalia.com) and app will be an unlimited source of news and information about what is happening inside and around the tournament. The social media channels of the tournament will be working closely with Federtennis and SuperTennis to provide fresh and interesting content. Women matches, including the ones which are not shown on TV, will be streamed live on the Facebook pages of SuperTennis and Internazionali BNL d’Italia.

VIRTUAL MEDIA ROOM – Due to the rigorous limitations that are put in place to prevent COVID-19 spread, a very limited number of journalists will be allowed inside the Foro Italico. All the other accredited members of media will be given access to a digital platform called Virtual Media Room. This brand new service put in place thanks to both ATP Media and WTA Media, will allow them to watch all matches and press conferences live, as well as to access online press releases, transcripts and various documents. Only the journalists who have been given access to the venue will be allowed to ask questions to players during press conferences, though obviously from remote. All protocols forbid direct contacts between members of media and players.

A BOOK FOR ROME’S 90th BIRTHDAY – To celebrate the 90th birthday of the Internazionali BNL d’Italia, FIT and Editore Giunti have published a book that collects and narrates its history through time thanks to the voices of prestigious journalists. From the first edition that took place in Milan in 1930 to the most recent days, the book is enriched by the preface written by Nicola Pietrangeli, the numerous exclusive interviews, plenty photos, stats, facts and iconographic researches. The book, “Gladiatori della terra rossa” (Red Clay Gladiators) will be available on most bookshops from September 16th for 40€.