With this fantastic final, the IBI19 Liveblog ends. Thank you all for joining us, you have been so many. 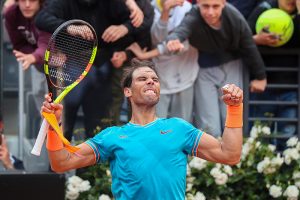 18.36 – Under 1-5, the Serbian plays “by inertia”. He fires shots with total anger, but already aware of the defeat. Rafa finds a cross forehand winner, after 2h and 25 minutes we are at MATCH POINT. Djokovic doesn’t close a banal volley, the following one dies into the net. GAME SET MATCH NADAL! The Spanish wins again the Internazionali BNL d’Italia International, ninth title for him, El Rey is back!

18.26 – Fifth game, Nadal goes up again. The forehand hits heavy shots, Djokovic has lost the best position on court, and his forcing is weaker. Rafa is ready to take the moment, he fires every shot at his best. Novak shoot out long an important backhand, DOUBLE BREAK RRRRRRAFA !!! 4-1 and service ahead. 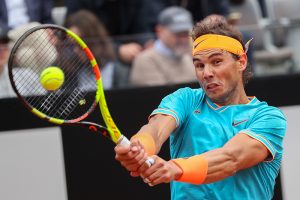 18.02 – Third set, Djokovic to serve. 40-30, the No.1 makes a bad mistake in a rally that has dominated. Rafa takes the chance of an early break. Djokovic pushes, but Rafa take the time of Nole’s shots and fires a great forehand. BREAK NADAL!!! Novak furiously destroys the racket by throwing it three times to the ground. Nadal goes to serve 1-0 ahead.

17.17 – Second set, Djokovic started to play “his” tennis. His legs are more dynamic, his shots more aggressive. he works hard with the forehand and boost with the backhand. Novak save a break point, but Nadal pulls a thundering forehand down the line. 2 all. Finally, we have “a match” in the Centre court. 3-2 Djokovic. 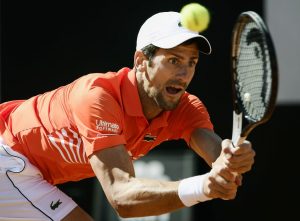 16.50 – 6-0 Nadal! UNBELIEVABLE result of this first set. Nadal almost perfect: intense, few mistakes and many winners. Djokovic incredibly “out of energy”. His shots are shorts, the first serve doesn’t work, Novak is playing with no intensity, suffering the power and intensity of Nadal. Nole won just 39% of points with the first serve, maybe it’s an absolute negative record for the Serbian champion…

16.33 – Rafa rolls, big forehands and few errors; Djokovic is in trouble, his shots are short, Nadal has time to fire his terrific forehand. DOUBLE BREAK RRRRRRRAFA! 3-0 ahead, and eases 4-0. Impressive start of this match for the spanish. 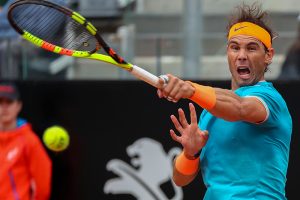 16.20 – What a start of the match! Long rallies, drop shots, top class on court! Nadal BREAKS Djokovic at the second chance, unforced by Novak (forehand into the net). Nadal holds his serve, 2-0 Nadal.

15.59 – Djokovic and Nadal ready to enter in the Centre court, high expectation for this match, 54th head to head. 28 Djokovic, 25 Nadal. “He’s my greatest rival of all time, for sure,” said Djokovic. “I’ve had so many matches against him. We have the longest rivalry of tennis of all time. Every time we get to play each other, it’s a thrill. It’s the ultimate challenge” said the number 1.

15.44 – The men’s double final ended on Pietrangeli. The title goes to the Colombian couple Cabal – Farah, 6-1 6-3 on Venus – Klaasen. Now the female doubles in progress: Azarenka – Barty ahead 3-1 in the first set vs. Groenefeld – Schuurs. 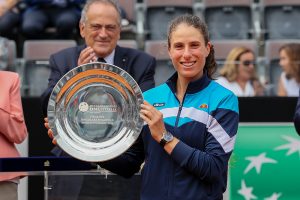 15.15 – Johanna Konta after the match: “It’s always tough playing Karolina. There’s rarely really a rhythm to the match. She plays with big shots, quite flat, and big serves. It can feel sometimes you’re fighting an uphill battle. That was the case today. I just thought she didn’t really have a letdown throughout the match. She played very consistently. I found it quite hard to get a footing into the match, which is credit to her. But equally I thought I actually did the best I could really. I didn’t do too much wrong today, so… Yeah, it’s disappointing. Obviously I would have loved to have won the title. I also have a lot to be proud of this week. To be honest, I don’t think the surfaces make as huge of a difference as you guys might think. I think her serve is equally as effective in a different way. I think she was obviously using her kick serve more, as well, which kicked quite high today here. I mean, her shots are still flat, they’re still big, quite deep. It was still just as difficult to really try and get her out of position. She reads the game very well. Movement-wise, I mean, I think that’s her biggest strength. Movement-wise, she is reading the game well”. 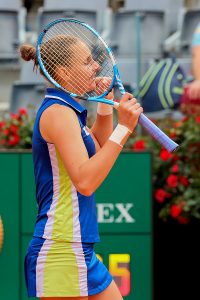 14.27 – GAME SET MATCH PLISKOVA! The Czech closes the second set 6-4, transforming the third match point. She wins the 76th edition of the IBI! She dominated the game with her stunning strokes: first serve, strong forehand, and a great quality in return, not as a “winning shot” but for tactical use of the shot, with which she has constantly the control of the rallies.

14.18 – Second set, seventh game. Konta continues in her tactic tennis, raises the rhythm with the forehand and then changes with the backhand. Pliskova turns more aggressive on returns, and rises to break ball, 30-40, a sort of match point. Johanna plays it very well. Pliskova breaks Konta on the fourth chance, runs ahead 4-3 and service.

13.43 – Serves for the set Pliskova and… shots some errors! A long ball, 15-30, and a double foul on 30 all, BREAKPOINT Konta !!! Johanna takes the risk in return, is very aggressive and come to the net, but smashes in the netcord a forehand, the ball fly OUT! What a chance …. Pliskova thanks. Karolina serves well and secures the first set. 6-3 PLISKOVA. The Czech remains in control of the match, but Johanna gave some interesting signals. 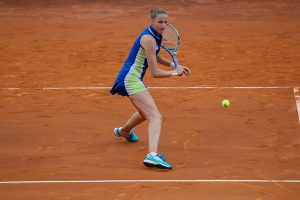 13.32 – The set runs too fast for Johanna. She has got a good rhythm with the first serve but on returns she can’t impose her variations against Karolina’s hard hitting from the baseline. In the seventh game she tries a slice backhand to break the inertia, but Pliskova arrives very well in and shoots a nice forehand winner; Konta tries again with a drop shot, but the Czech see it in advance, runs fast to net and touches the ball for nice winner. 5-2 Pliskova.

13.16 – Pliskova, what a start! Holds the first service game and boost at her best in return. Konta is literally “overwhelmed”, and perhaps accuses the tension of the moment. Immediate BREAK for Pliskova. In 9 minutes of tennis, Karolina leads 3-0. 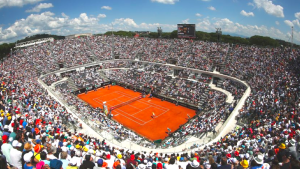 13.05 – GOOD SUNDAY ROME! The 2019 final of the Internazionali BNL d’Italia has just started! Karolina Pliskova, seeded No. 4, opposed to the surprise of the tournament, the British Johanna Konta. We expect an interesting final, given the clear technical difference between the two finalists.