Madison still searching for Keys to clay success in 2017

Madison Keys is still looking for her first clay court victory of the year after she was upset by Daria Gavrilova in the first round at the Internazionali BNL d’Italia.

The No. 10 seed, who reached the final here last year, was knocked out of the tournament by the qualifier in three sets on day three at the Foro Italico. The defeat took her win-loss record for the season to 3-5 and is a disappointment for the American who performed so well here in 2016.

“Obviously there is a lot of moments where I could have played better. I don’t think I served very well today. She’s a tough opponent. So, you know, she was getting that extra ball back and doing something really well with it,” said Keys. “It was a tough match. I fought as hard as I could. Kind of left it all out there. You know, just wasn’t my day.”

Keys underwent wrist surgery following the 2016 WTA Finals in Singapore and was unable to start her season until Indian Wells. A solid performance there, where she reached the fourth round, and in Miami, where she exited at the third round stage, have since been followed by opening round losses in Charleston, Madrid and now Rome. 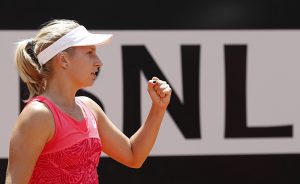 Credit must be given to Gavrilova, who remained focussed throughout the two hour 25 minute encounter despite finding herself up against it multiple times during the match. The world No. 33 showed renewed focus after losing the first set and fought back from a break down three times in the decider. Some aggressive returns and neat dropshots helped the Australian to a 26 75 75 win and her first victory over Keys.

Gavrilova, who was forced to come through qualifying as she forgot to enter the main draw, will play Caroline Garcia in the next round.