Venus to face Azarenka, Muguruza takes on Stephens in first round clashes

Venus Williams against Victoria Azarenka and Garbine Muguruza versus Sloane Stephens are just two of the mouth-watering first round women’s matches that are scheduled to take place at the Internazionali BNL d’Italia from Monday.

Williams, the 1999 Italian Open champion, and Azarenka faced off last month in Lexington with the American, who has taken a wildcard into the event, extending her head-to-head lead to 6-2. Azarenka has been in imperious form of late however and will be hoping she can transfer the level of play that saw her lift the trophy at Cincinnati and reach the final at the US Open onto the clay courts at the Foro Italico. The Belarusian is no stranger to success in Rome, having finished runner-up to Serena Williams in 2013 and clinched the doubles title last year with Ashleigh Barty.

There will be no let up for the winner either as Australian Open champion and No.3 seed Sofia Kenin is waiting in the wings as a second round opponent.

Stephens will be looking to reproduce the kind of form which saw her defeat Muguruza in the fourth round of Roland Garros last year and make it three wins out of four over the two-time Grand Slam champion. Awaiting the winner in the second round will be either Ons Jabeur or 16-year-old Coco Gauff, who is making her debut in Rome.

Top seed Simona Halep will open her Italian Open campaign against either Anastasija Sevastova or Italian wildcard Jasmine Paolini and has been drawn in the same quarter as No.8 seed Petra Martic, No. 10 seed Elena Rybakina and No.16 seed Donna Vekic, who will take on former Roland Garros semi-finalist Amanda Anisimova in the first round.

Also in the top half are 2019 runner-up Johanna Konta, the No.7 seed, and three-time Grand Slam champion Angelique Kerber whose first round opponent is Katerina Siniakova. 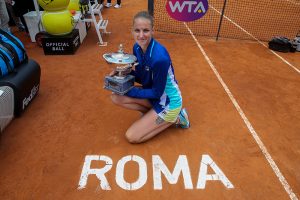 No.2 seed Karolina Pliskova will begin the defence of her title against either Veronika Kudermetova or Barbora Strycova with No.6 seed Belinda Bencic, No.11 seed Elise Mertens and 2017 Roland Garros champion Jelena Ostapenko all drawn in her quarter.

Two-time Italian Open champion Elina Svitolina is also in the bottom half, as are 2019 Roland Garros finalist Marketa Vondrousova, No.5 seed Kiki Bertens and Caroline Garcia who will play 2018 Italian Open semi-finalist Anett Kontaveit in another enticing first round encounter.

Camila Giorgi, who was on hand to help with the draw ceremony on Saturday, will play Dayana Yastremska while the only other Italian in the draw, Elisabetta Cocciaretto, will face a qualifier.

The main draw gets underway behind closed doors at the Foro Italico on Monday.