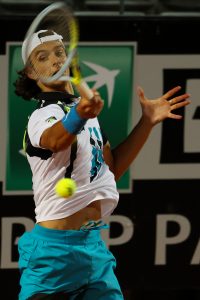 22:42 – Under 8 games to 0, finally Wawrinka moves on into the game. Faster on court, Stan starts to serve good first services. In the sixth game, Musetti falls 30-40, and tries a drop shot that dies on the net. BREAK WAWRINKA! There is a match out there… 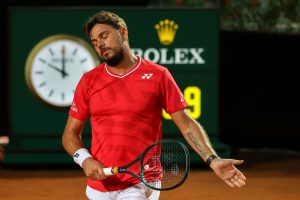 22:19 – 6-0 MUSETTI !!!!! The result of the first set on “Centrale” is incredible. The 18-year-old Italian literally crashes Stan Wawrinka in just 23 minutes. What a debut in Rome for Lorenzo!

19:46 – Rain over Foro Italico, but Cecchinato and Edmund continue to play on the Pietrangeli! Muguruza vs. Stephens and Raonic vs. Mannarino are temporarily suspended. 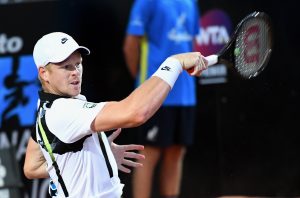 19:40 – Too many unforced errors by Cecchinato, Edmund stays solid and breaks the Italian in the eighth game. He serves 5-3 up and secures the set 6-3. Muguruza on “Centrale” takes the first set 6-3, winning a twentieth point decider game, saving 4 break points.

19:10 – The shadows of the evening fall over Foro Italico and the sky becomes threatening, with thunder that does not promise anything good … Marco Cecchinato has just taken the field against Kyle Edmund on Pietrangeli, while the first points has been played on the Centrale between Muguruza and Stephens. Will it rain?

18:53 GAME SET MATCH GAUFF !! Cori is solid e serves well, while Jabeur looks passive. The set ends 6-3. It’s a stunning success for the American, against a dangerous opponent on clay.

18:50 – The second set on Pietrangeli is a sort of “Break Festival”! Eighth game on Pietrangeli, and FIFTH BREAK IN A ROW! Gauff ahead 5-3, serves for the match. 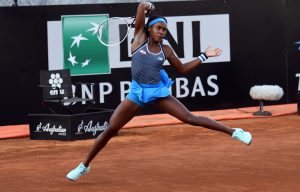 18:11 – Turnaround on the Pietrangeli! Jabeur serves 4-3 up, but suffers the impetus of Gauff’s rhythm, BREAK CORI! Her pace pushes her to a 5-4 lead. Jabuer to serve, 30-40 and SET POINT GAUFF! A long rally ends with the ball touching the net DEADLY. SET Gauff, 6-4.

17:42 – Bernarda Pera leads 6-3 2-1 over Svetlana Kuznetsova, 1 all between Nishioka and Kecmanovic in the second set.

17:29 – Jabuer vs. Gauff has just started on the Pietrangeli. It is a very interesting match due the contrast between the Tunisian’s tactical game and the hard-hitting from the baseline by the young American. 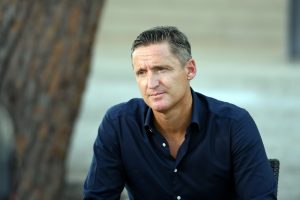 17:20 – The President of the ATP Andrea Gaudenzi has arrived at Foro Italico. Gaudenzi played two quarter-finals at Internazionali BNL d’Italia, in 1994 and 1996.

16:37 – The only male’s match on display at this moment is Kecmanovic vs. Nishioka, at the warm up on Field 1. Pera and Kuznetsova are at warm-up on the Grand Stand. Putintseva is ahead 4-2 over Peterson, Kontaveit is ahead 5-3 in the second.

16:23 – Epic finale between Sandgren and Caruso! After a fierce fight, the tiebreak is the right conclusion for the match. A double fault from Tennys sends Caruso forward 3-1. The score is 4-2 Caruso at court change. Salvatore plays two excellent points pushing as hard as he can, moves 6-3 and three match points! Sandgren return is out, 7-4 for the Italian. What a great match! 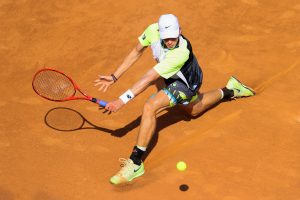 15:40 – SET SHAPOVALOV! 6-2 the score. Pedro Martinez stuns the American Sam Querrey, 6-3 7-6 the final score of the match. The match between Kontaveit and Garcia on the Pietrangeli field has just begun. Real DRAMA in the third between Caruso and Sandgren, very closed match…

15:25 – What a fight between Shapovalov and Pella! The first game lasts 16 points, with the Canadian wasting 3 break points. In the third game, Denis breaks Guido, 3-1 ahead. Tons of unforced right now… 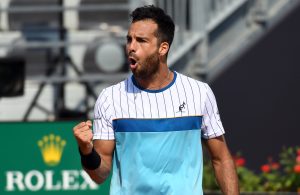 15:10 – Caruso! The Italian wins the second set 6-3, the match goes to the third. Pietrangeli Court, dramatic tiebreak between De Minaur and Koepfer. Fighting, unforced, opportunities for both. The German climbs 6-4, two Match Points! On the second, De Minaur fires out an easy backhand passing shot, Koepfer wins the match. Lajovic up 6-4 against Davidovich-Fokina.

14:40 – Game set match Begu. Brave match by Elisabetta Cocciaretto, who fought on every point despite the clear score for the Begu in the second set, ended 6-2. Just finished the first set on Court 1 between Juvan and Hercog, 6-4 in favor of the Slovenian, break in the tenth game.

14:20 – Sandgren wins the first set, 6-3 on Caruso. Some numers: Tennys scores 7 winners and 14 unforced, against Caruso’s 1 winner and 15 unforced. Huge this gap in the first set. De Minaur takes a break in the third set, 2-1 and service. Just started Lajovic vs. Davidovich-Fokina on the Court 2. 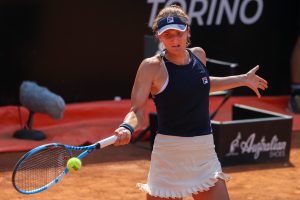 13:49 – First set ended in two other matches. Begu overwhelms Cocciaretto with greater power, 6-2 the score; Koepfer comes back from 0-3 and with 6 games in a row, securing the second set 6-3, 1 set all against De Minaur on Pietrangeli.

13:31 – Win for Federico Coria over Jan-Lennard Struff. Surprisingly the Argentine closed the match winning the second set at tiebreak, securing a place in the second round of the tournament.

13:15 – TIEBREAK TIME: Sousa and Millman at the “decider”. Millman is more accurate, serves with great rhythm and his cross backhand is powerful. He leads 4-2, and 6-2, four MATCH POINTS! Good the first. John secures the second round match against Diego Schwartzman, clay court specialist and eighth seed of the tournament. 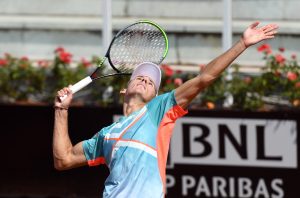 13:10 – Hard fighting between Alex De Minaur and Domink Koepfer on Pietrangeli. A series of breaks and counter breaks, with long rallies. The Australian is ahead 4-3 and serves in the first set.

12:49 – GAME SET MATCH RUBLEV! The Russian wins in two sets against Bagnis, 6-4 6-4 the final score. Andrey was in control throughout the match, “slowing down” his boost after a very high intensity start. 25 winners by Rublev, 14 by Bagnis, 26 unforced for both. In the next round Rublev faces Hurkacz. 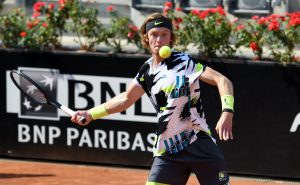 12:00 – Rublev secures the first set 6-4, the Russian is in control of the game. Very intense match between Millman and Sousa, 5 all on Grand Stand.

11:45 – Siniakova 6-3 on Kerber, she won the first set of the day. The only break point conceded in the whole set was decisive. The fighting continues on the Grand Stand Arena, Millman leads 4-3 on Sousa. Vondrousova ahead 5-1 and break point / set point … Doi cancel it with courage, but the set seems gone for her.

11:15 – What a start Andrey! Rublev dominates from the first points with his overwhelming pace. Immediate BREAK, 1-0 ahead on Centre Court. Just started the matches on the other courts.

10:58 – GOOD MORNING FROM ROME! Even today the weather in in the “eternal city” is wonderful, the matches of the second day of the Internazionali BNL d’Italia are about to begin. The program is huge. On “Centrale” the Russian Andrey Rublev play against the Argentine Facundo Bagnis; Angelique Kerber and Katerina Siniakova open the program on the Pietrangeli Court, while John Millman and Joao Sousa begin on the Grand Stand Arena. Are U Ready? GO!