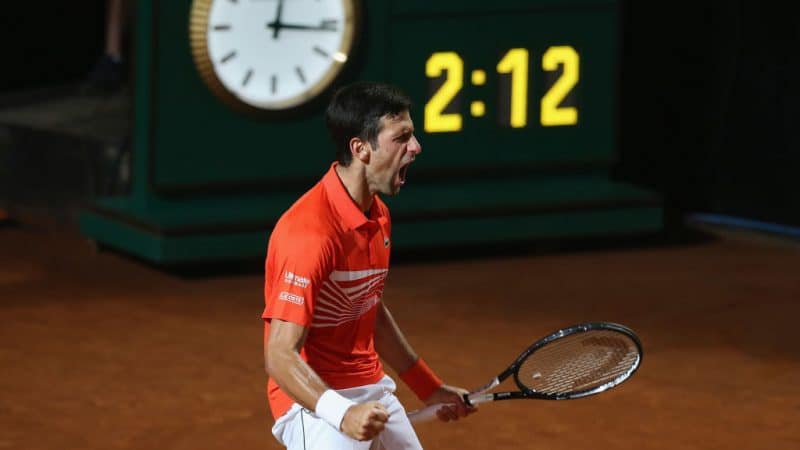 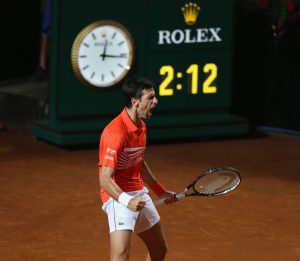 1.04 – GAME SET MATCH DJOKOVIC! 6-4 in the third set, an unbelievable and unforgottable match tonight, here in Rome. Thank you guys, you gives as something really special tonight! See you tomorrow Roma!

0.47 – Third set, Break Djokovic !!!!!! After a sensational point with a demi-volee of DP, Djokovic imposes his crazy strength and precision. He plays an incredible return, a forehand cross court. Juan Martin misses another forehand. Nole ahead 3-2 and service.

00.18 – Tiebreak! Incredibile tennis, DelPo rise to 6-4, two match point!!! An aggressive forehand fly out, than Djokovic plays a fantastic drop shot, to cancel the second. On 7-6 Djokovic, a forehand by Del Potro finish into the net. Set Djokovic! WHAT A MATCH!

23.06 – Del Potro serve 5-4 to win the first set. He take a TOTAL risk with a backhand that “flirt” with line… Another incredible backhand, JMDP wins 6-4 the first. Stunning tennis tonight.

22.11 – Djokovic vs. Del Potro starts. Djokovic very fast with his feet, pushing safely and keeping the service easily. Even DelPo starts off with a spur beat, the forehand runs well. 1 all.

21.40 – MARIAAAA! Mladenovic shoots the last backhand into the net, the match ends here. Sakkari steps in the semifinals, tomorrow he will play Pliskova in a match that promises to be a deadly battle of high-speed forhands. 38 winners for the Greek, and 90 points won in the match against 74 in the French.

20.29 – 30-30. Mladenovic close to win the set. Long rally, than an impressive cross backhand, winning shot. Kiki set point! Sakkari hits a wide shot, SET MLADENOVIC! Partial 12 points 3. The quality tennis of the French exploded in the end of the set. 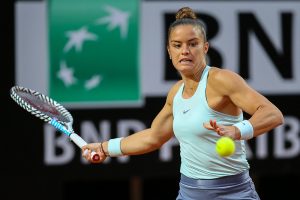 19.39 – The evening session begins! Centre court, Sakkari to serve. Maria immediately boost the power of her service and of her forehand. 1-0 ahead. We underline that the Greek this year on claye has a record of 11 victories and only 3 defeats. Numbers that certify her excellent season.

18.47 – Double break Johanna! Vondrousova concedes many unforced errors, and laughs bitterly seeing the match run away. 4-1 Konta on service, the first semi-final at the IBI19 is one step away. Vondousova stop here. Konta pushes and wins the match 6-1! Konta steps into the semifinal. Brava Johanna!

18.10 – Diego Schwartzman is the man of the day. His words in the press conference: “I think today I try to did every shot aggressive, also in the defense. But before when I played against Kei three times already: Buenos Aires, Madrid and US Open. Every single time was really tough, really close match. I won set in every match, so I felt the confidence to beat him. Also yesterday he played too many hours, more than me. I will say thinking before the match trying to be aggressive and trying to get every chance he give me. I think I did well”.

17.35 – Other statements by Nadal. Q. The beginning the clay season in Monte-Carlo, how much are you satisfied now of the quality of your game? “I say yesterday, I will not compare every day the previous weeks. What happened in Monte-Carlo happened. What happened in Barcelona happened. What happened in Madrid happened. Here we are. We are in Rome. That’s a different event. The good thing, if you want to talk about the past, is during the last month, my feeling is every week was better than the previous one. That’s always a good thing, not only because being better I have better chances to win, but especially because like a professional player and for my personal feeling, when you advance, when you feel better every week, is something that is a good personal satisfaction because the work after a tough period of time, you try to be there all the time doing the right things, and when you see yourself being better and better every day, that’s important personal satisfaction for me”.

17.30 – Rafa in press conference: “Well, the beginning of the match have been good. But he was playing great, being honest. I was not playing bad at the beginning at all. But he was playing unbelievable. No mistakes, a lot of winners, taking the ball early. Was a very difficult first set. Was one of the first sets that I am more happy with. I think I had a good feelings during the whole match. Then after winning that first set, in the second I was able to — of course he slows down a little bit, but I was able to play a little bit more aggressive with the forehand. I did a lot of things well this afternoon. I am very happy to be in semifinals again. Is a good victory.” 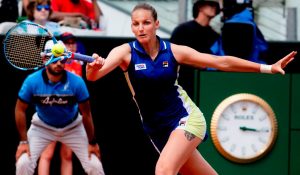 17.06 – PLISKOVA! The Czech stuns Azarenka with her impressive athletic freshness and with the effectiveness of her first service. Vika was generous, gave everything, fought, but the physical collapse was evident from the middle of the second set. Heavy feet, less reactive, despite her desire to fight as hard as she could, she was not able to recover on Karolina.

16.42 – Due to the change of program, Johanna Konta and Marketa Vondrousova are about to step into the Centre court. Kiki Bertens, already in the semifinals for the Osaka withdrawal, waiting for the winner of this match.

16.31 – 6-2 Pliskova. Karolina was very efficient in the second set with her forehand and put Azarenka on the ropes. Vike suffer the second break in the seventh game. The third set will decide the semi-finalist vs. Mladenovic or Sakkari. Meanwhile, the Pietrangeli is crowded by the many fans who left the main court. 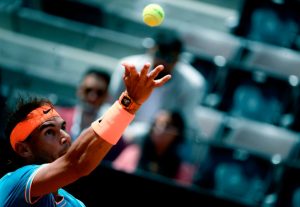 16.18 – RRRRRRRAFA! 6-0 Nadal, “el rey de la cancha” snatches the 11th semifinal in Rome. He failed to give continuity to his performance, but he makes the right play at important moments, and he crushed the resistance of an excellent Verdasco, unexpectedly one of the best players of these IBI19. Tsitsipas will challenge Rafa tomorrow … what game awaits us! The revenge of Madrid Masters1000 on display tomorrow.

15.42 – SET NADAL !!!! Great emotions at the same time between Pietrangeli and Centre court. “Nando” suffer the tension of serving under 4-5, he is taken by frenzy. He boosts at his best but without control. He gives Rafa the decisive point of the set with a bad unforced error. Nadal break, 6-4 in the first set.

15.40 – Pietrangeli on fire! Tiebreak time between Vika and Karolina. 3 point all. Double foul Azarenka!?!?! Pliskova shots unforced. High tension, 5 even. Victoria takes the control, she find a nice forehand down the line winner, it’s set point. Double fault Pliskova! Too much tension, Karolina serves a second serve in the middle of the net. Azarenka wins 7-6 the first set, what a battle!

15.18 – Rafa’s forehand begins to roll: with his feet closer to the baseline, he puts Verdasco on the ropes. Nadal break point! Verdasco plays badly!?! He tries a drop shot, Rafa arrives comfortable and Fernando touches wide. Break Nadal, 3 all and service for the eight-time champion. The match could turn to Rafa’s side, we continue to follow it! 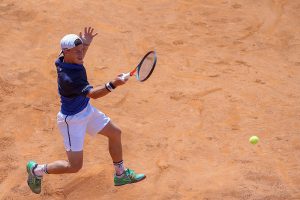 15.07 – Game set match Schwartzaman! In 1 hour and 27 minutes the Argentine overcomes Kei Nishikori, rising to the IBI19 semifinals. An unexpected result, but absolutely deserved for Diego, very strong at curbing the return of the Japanese and then run away again in the second set. He waits the winner of Djokovic vs. Del Potro.

14.45 – Just started the super match on the Centre court Nadal vs. Verdasco. Immediately emotions: Verdasco break ball! Rafa runs forward but the attack is short … Fernando thanks, and passes Rafa with a strong forehand down the line. Verdasco break at the opening, 2-0.

14.25 – Strong emotions on the Grandstand! Schwartzman runs 5-0, serves 5-1 to win the set, but Nishikori changes game tactics. Increase the topspin, high balls and the Argentine loses rhythm, makes many unforced errors. The match is 5-4 Schwartzman, Nishikori on service. The Japanese moves forward 30-0, but makes several errors, and Diego wins set 6-4.

13.57 – Roger Federer has pulled out of his quarterfinal match with a right leg injury. He said: “I am disappointed that I will not be able to compete today. I am not 100% physically and after consultation with my team, it was determined that I not play. Rome has always been one of my favorite cities to visit and I hope to be back next year”. 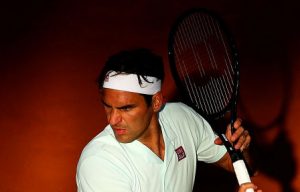 13.32 – FEDERER WITHDRAW !!!! Unfortunately, Roger was forced to retire due to a problem with his right leg. Yesterday in the last points of the match vs. Coric, the Swiss touched his right leg, starting to feel some problems. Roger will issue a statement after making the necessary medical checks. Instead of Federer – Coric, the Bryan twins will play on Central, opposed to Cabal – Farah. 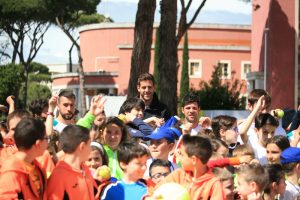 13.00 – This evening Del Potro feces Djokovic for the third time in the Rome quarter-finals. The n.1 (and 4 time champion here) is 2-0 int those matches, and 15-4 overall against DelPo. Not everyone knows that Juan Martin holds an absolute record: 10 wins over players ranked n.1 in the world among players never be ranking n.1 themselves. Next on the list are former n.2 Chang and former n.4 Krajicek with 7 wins each.

12.21 – Statistical curiosity: how much were the players in the field yesterday, with the double match? Here is the data. Nadal: 2h and 9 minutes, as Djokovic, exactly 2h and 9 minutes! Tstsipas 2h 20 min; Del Potro 2h 55 min; Schwartzman 3h 10 min; Nishikori 3h 20 min; Federer 3h 51 min. L’Iron Man od the day “el zurdo” Fernando Verdasco, 4 hours and 54 minutes. We wonder if Fernando will have recovered the energy for today match, against Rafa Nadal … 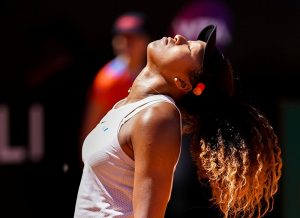 12.00 – GOOD MORNING ROME! Friday, good weather, great tennis, what’s more? We are ready to live and tell the matches and the curiosities of another stunning day of tennis! The doubles matches have already started at 11 on the various fields, already crowded. Unfortunately we open the Friday liveblog with a bad news. The No. 1 Naomi Osaka was forced to retire because of a problem at her right hand. What a pity. Kiki Bertens direct to the semifinals without playing, waiting for the winner of Konta vs. Vondrousova, which will be held on the Grandstand as a third meeting. Instead of the women’s match, they take the field on the Central Chan – Chan vs. Stosur – Zhang.