All-Italian clash in first round of women’s qualifying

It will be a case of youth versus experience when No. 9 seed Camila Giorgi faces compatriot Deborah Chiesa in front of a home crowd in the first round of qualifying at the Internazionali BNL d’Italia on Saturday.

Experience comes in the form of Giorgi, a former world No. 30 and WTA titlist, who has reached the fourth round at both Wimbledon and the US Open. The current world No. 56 is looking to secure a spot in the main draw here for the first time since 2015 but standing in her way in the opening round of qualifying is Chiesa, who arrives at the Foro Italico on a career-high ranking of No. 166. 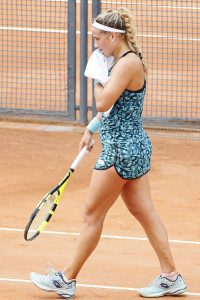 The 21-year-old Italian has climbed over 300 places in the rankings since making her debut here as a wild card last year and will be hoping she can find a way past Giorgi on Court Pietrangeli and remain in the hunt for a main draw place.

Serbia’s Aleksandra Krunic has been named as the No. 1 seed and will start her qualifying campaign against Wang Yafan (CHN) on Court 6 as she bids for a place in the main draw for the first time.

Aryna Sabalenka (BLR) and Alison Van Uytvanck (BEL) are the No. 2 and 3 seeds and will face Americans Alison Riske and Bethanie Mattek-Sands respectively in the first round. USA is guaranteed a player in the final round of qualifying after No. 4 seed Danielle Collins and Varvara Lepchenko were drawn against each other in the fourth match on Court 6.

Other seeded players include Donna Vekic, Olympic champion Monica Puig, and Monica Niculescu. Qualifying starts at 10am on Saturday 12 May.