Amanda Anisimova came back from a break down in the first set and saved three set points in the second to edge No.16 seed Donna Vekic 7-6(4) 7-6(6) and advance to the second round at the Internazionali BNL d’Italia.

The 19-year-old American raised her level in the important moments and capitalised on a poor first serve showing from Vekic to successfully navigate her way through a tricky opening match. Up next for Anisimova is either Camila Giorgi or Dayana Yastremska, who play each other in Monday’s night session.

It was a more straight forward affair for No.10 seed Elena Rybakina who cruised past Ekaterina Alexandrova 6-0 6-4 on Court Pietrangeli. It was a third meeting this year for the two players but a first victory for the Kazakh who had lost to Alexandrova in the Shenzhen final and again in Cincinnati last month. 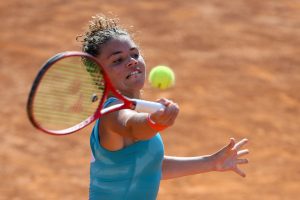 Marie Bouzkova will be Rybakina’s next round opponent after the Czech player recorded a 6-3 6-4 win over Alja Tomljanovic. There was also victory for the in-form Elise Mertens, the No.11 seed, who never looked troubled as she swept past Hsieh Su-Wei 6-3 6-1.

Jasmine Paolini gave Italian fans plenty to cheer about when she upset Anastasija Sevastova 6-2 6-3 on Court Centrale. Her prize is a second round clash against world No.1 Simona Halep.