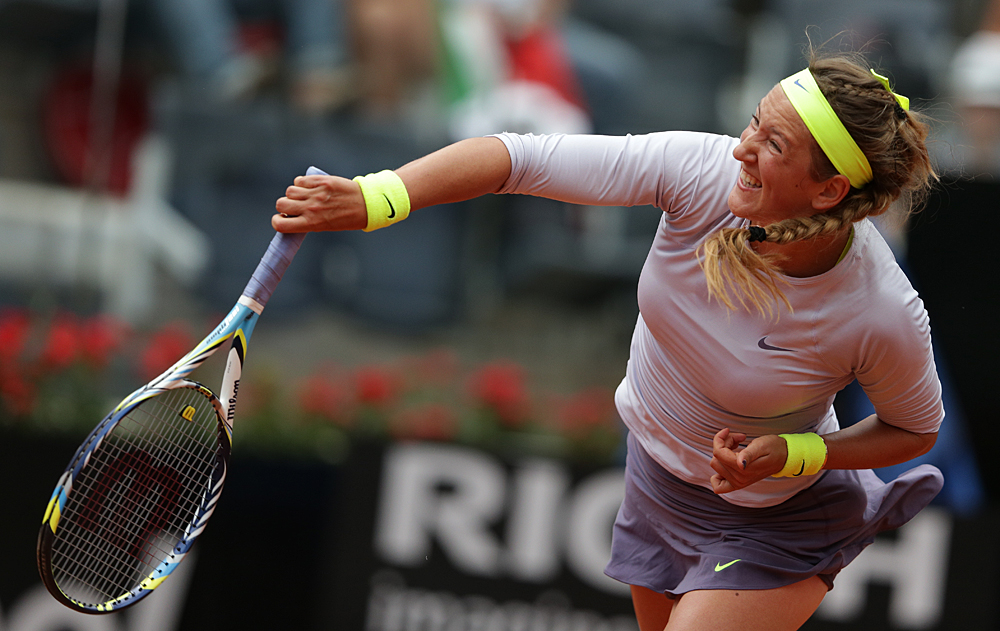 This content was published 8 years ago. It may refer to a past edition of the Internazionali d’Italia.

For a player struggling somewhat with form and injury, Victoria Azarenka will be delighted to have claimed a third straight win over Caroline Wozniacki, the fifth seed, even if she claimed afterwards she is still feeling “a bit weird.”

Azarenka was able to cut out the double faults that had marred her first round win over Lucie Hradecka until match point, serving one at the wrong time and it also took the Belarusian until her fifth match point to seal a 62 76(2) win

“It’s important to really take the match in your control and really stay aggressive and keep going because she’s such a fighter, she brings a lot of balls back and she anticipates really well,” she said. “It was important to dictate and take opportunities.

“I have been playing pretty good tennis and had quite a few good wins this year. It’s just important in this moment to be able to elevate and improve my game. Sometimes it just take a little bit longer, sometimes its shorter and everything clicks. For me I’m still finding my rhythm, finding to bring together my game. It’s getting better.

“I’m feeling little better but still a little bit weird. The important thing to me is really to fight through and try to pay attention to what’s happening. You have to go out there, nobody is going to feel bad for you.”

Wozniacki was not the only seed to depart on the fifth day of the Internazionali BNL d’Italia with German Angelique Kerber also falling to Irina-Camelia Begu 63 63.

For Eugenie Bouchard, a first win since March in Indian Wells was welcome, as she beat Zarina Diyas of Kazakhstan 63 64.

“After a couple of matches that you lose in a row it can definitely start playing in your mind a little bit,” said the Canadian. “So to turn it around it’s always nice. I was battling myself a little bit too, it’s hard enough to play against your opponent so it’s not easy. I’ve felt a lot in that position recently and that came into my mind a little bit but I was able to pull it together at the end.

Venus Williams comfortably moved into the third round with a 64 63 win over Ukraine’s Elina Svitolina while Carla Suarez Navarro was too good for Great Britain’s Heather Watson as she claimed a straightforward 61 61 victory.

In the evening, fourth seed Petra Kvitova avoided a scare recovering from 52 down in the final set to take the tiebreak 71 against home wild card Karin Knapp. Jelena Jankovic also prevailed 64 76(2) against Magdalena Rybarikova in a match that ended at 12.03am local time.