Filippo Baldi caused yet another upset on Sunday when he took out former world No. 23 and five-time ATP titlist Guillermo Garcia-Lopez 46 64 76(5) in the final round of qualifying to reach the main draw of a Masters 1000 event for the first time in his career.

The victory capped an outstanding two days of tennis for the 22-year-old Italian wild card, who had also caused a shock on Saturday when he knocked out No. 6 seed Marton Fucsovics in a marathon three hour 10 minute match.

In front of a packed crowd on Court Pietrangeli the world No. 368 battled past the 34-year-old to secure the win and set up a first round match against fellow qualifier Nikoloz Basilashvili.

Top seed and Next Gen player Stefanos Tsitsipas advanced to the main draw following a 76(9) 64 victory over Dusan Lajovic, however No. 2 and 3 seeds Joao Sousa and Mischa Zverev were not so fortunate. The Portuguese player was beaten in straight sets by Chile’s Nicolas Jarry, a clay court specialist who enjoyed much success on the red dirt earlier this year in Quito, Sao Paulo and Rio de Janeiro. Zverev, whose younger brother Alexander is the reigning Rome champion and won the title at the Madrid Masters on Sunday, just fell short in a three-set tussle against Argentina’s Federico Delbonis.

Malek Jaziri was the only other qualifier on the men’s side on Sunday as Frances Tiafoe had booked his place in the main draw on Saturday night after his second round opponent, Viktor Troicki, withdrew with a back injury. 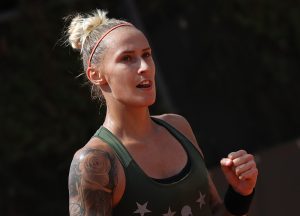 Polona Hercog was among the first of the women to qualify after she saw off No. 1 seed Aleksandra Krunic 76(4) 64, guaranteeing herself a spot in the main draw at the Foro Italico for the first time since 2011.

All was not lost for Krunic as she was awarded a lucky loser place to face Roberta Vinci, who is set to retire from professional tennis this week, on Court Pietrangeli on Monday.

Natalia Vikhlyantseva, Kaia Kanepi and Alison van Uytvanck all required three sets to book their places in the main draw, while it was the end of the road for Italy’s Camila Giorgi, who was beaten 26 64 62 by the up-and-coming American player Danielle Collins.

Vekic advanced through qualifying when her opponent, Olympic champion Monica Puig, was forced to retire when trailing the Croat 4-1, and will join Ajla Tomljanovic, a straight sets victor over Zarina Diyas, and Su-Wei Hsieh, who overcame Mona Barthel, in the main draw.

The women’s main draw gets underway at 11am on Monday.