Top seeds Rafael Nadal and Simona Halep, defending champion Alexander Zverev and Grand Slam winners Caroline Wozniacki, Garbine Muguruza and Venus Williams are just some of the names in action on a blockbuster day at the Internazionali BNL d’Italia on Wednesday. 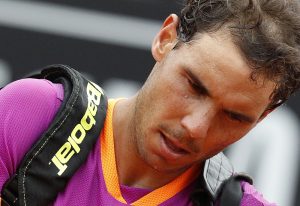 Nadal gets his quest for an eighth title at the Foro Italico underway on Court Centrale with an opening clash against Bosnia/Herzegovina’s Damir Dzumhur. The Spaniard defeated the world No. 31 for the loss of just five games at the Australian Open earlier this year but Dzumhur has notched up a victory over the 16-time Grand Slam champion, prevailing when Nadal was forced to retire at the Miami Masters in 2016.

Halep opens proceedings on Court Pietrangeli when she takes to the court to face Naomi Osaka in what looks like being an enticing encounter. The Romanian will be out for revenge after the world No. 21 knocked her out of Indian Wells in straight sets earlier this year but will be wary of the Japanese player, who looked in scintillating form when dispatching of two-time Grand Slam champion Victoria Azarenka in her first round match on Monday. 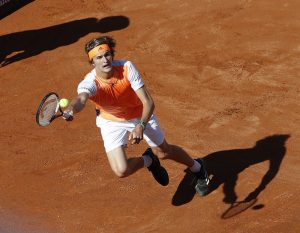 Alexander Zverev gets the defence of his title underway on Wednesday when he faces Italian wild card Matteo Berrettini in the night session on Court Centrale.

The world No. 3 has been in imperious form of late, lifting back-to-back trophies in Munich and at the Madrid Masters and shouldn’t be troubled by the 22-year-old, who is ranked exactly 100 places lower than him. Berrettini has advanced to the second round at a Masters event for the first time in his career after overcoming Next Gen player Frances Tiafoe in straight sets on Monday.

Another mouth-watering battle taking place on day three is the third round clash between Kei Nishikori and Grigor Dimitrov, scheduled for Next Gen Arena. The Japanese player may lead their head-to-head 3-1 but he lost their most recent encounter in the Brisbane final earlier this year. The pair has never met on clay.

Following Nishikori and Dimitrov will be 1999 winner Venus Williams against Russia’s Elena Vesnina. 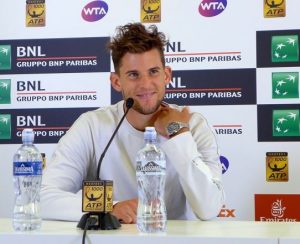 No. 6 seed Dominic Thiem faces home hope Fabio Fognini in the opening match on Court Centrale. The Madrid Masters finalist will be hoping to extend his unbeaten run against the Italian, who recorded his 300th ATP Tour-level victory with a surprisingly straightforward win over Gael Monfils in Monday’s night match.

Court Centrale also hosts the matches of Maria Sharapova, who will face a tough battle against Dominika Cibulkova, and No. 3 seed Garbine Muguruza, who closes out the night session when she takes on Australia’s Daria Gavrilova.