Novak Djokovic dispatched of Alexandr Dolgopolov in ruthless fashion in his first round match on Monday, allowing the Ukrainian just four games in their 55 minute encounter.

The Serb looked impressive as he raced to a 61 63 victory over the former world No. 13, showing promising signs as he continues his return to form following an elbow injury.

“I feel like my game has been going in the right direction in the last couple tournaments,” said Djokovic, who finished runner-up to Alexander Zverev here last year. “I know that I haven’t been up to the level that I desired, but, as I said, you know, Madrid and now the first match here has been already encouraging, you know, story. And hopefully, I can continue in the right way.”

The four-time Internazionali BNL d’Italia champion was clinical in the opening set, not allowing his opponent into the match and was rewarded with a 6-1 lead. 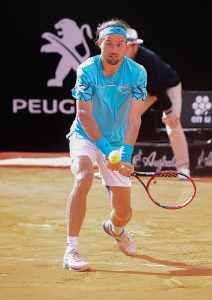 Dolgopolov began to hit more freely and his change in attitude and approach was rewarded with a break point opportunity at 1-1 in the second set. It was a test that Djokovic passed with flying colours, firing down a pair of unreturnable serves before producing a high-kicking second serve which Dolgopolov dumped into the net, to see out the game.

Djokovic’s focus remained as he broke in the next game to lead 3-1 and continued the match in style, clinching victory with a backhand cross-court winner.

The world No. 18, who has never lost before the quarterfinals at the Foro Italico before, will meet a qualifier in the second round in the form of either Nikoloz Basilashvili or Filippo Baldi.