No. 10 seed Grigor Dimitrov became the highest profile casualty on the second day of the Internazionali BNL d’Italia when he was dumped out of the tournament at the hands of Juan Martin del Potro.

Dimitrov won a close first set after claiming the only break but Del Potro went up a gear in the second and soon found himself up a double break. While Dimitrov reclaimed one of the breaks it wasn’t enough to prevent the Argentinean from winning that set. Del Potro then broke the world No. 11 at 4-4 in the final set and promptly served out a 36 62 63 victory. 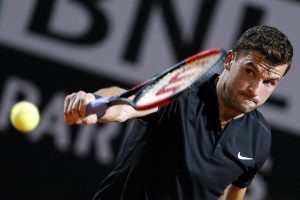 It was the fifth consecutive time that Del Potro had defeated Dimitrov and came just a matter of days after the Bulgarian suffered another crushing loss at the Madrid Open, where he was defeated by Dominic Thiem despite holding five match points.

“I think I play well during the whole match. I had my break points in the first set, and Grigor played better in that moment. I think he took the opportunities,” said the former US Open winner.

“But in the second and in the third I played solid from the baseline. I hit harder with my backhands, and I think my serves help a little bit to win the match.”

Del Potro will be up against Great Britain’s Kyle Edmund, who defeated Joao Sousa 63 64 earlier in the day, in the second round.