Grigor Dimitrov came back from a set down to end Jannik Sinner’s hopes of a first Masters-1000 quarter-final, defeating the Italian wildcard 4-6 6-4 4-6 in the third round at the Internazionali BNL d’Italia.

It was a tight match between the two players with a number of momentum shifts. The 19-year-old got off to the best start when he broke to love in the opening game and was able to consolidate his lead when he prevailed in his 15-point opening service game. He was the more dominant on serve in the opener, holding break points again in the fifth game, and held on to his advantage to secure the first set in 46 minutes.

Dimitrov started poorly in the second set as he was broken to love again but this time he was able to regain the break in the very next game. The set continued on serve until the 10th game where a trio of forehand errors allowed the Bulgarian to break and clinch the second set.

The No.15 seed’s experience told in the decider as he raised his level and began to punish Sinner’s forehand wing. He had break points in the second game and again in the fourth, converting them in the latter to edge ahead. The Italian world No.81 didn’t give up however, breaking back for 5-4 but some bold hitting in an mammoth tenth game took its toll on the 19-year-old, allowing Dimitrov to seal the victory on his fifth match point.

“Experience helps me a lot, but, you know, today, for example, the first set things I wanted to do didn’t work. Ultimately I had to change, so I started slicing a bit more, right? So I had to kind of alter my game a bit more,” explained Dimitrov.

“Again, it’s not the easiest when you play against a player you have never played against an official match. You know, Jannik, sort of young guy who has nothing to lose, everything to gain. He’s loose, hits the ball well. He’s playing at home, so to speak.  But I always say tennis is not a sprint. Tennis is a marathon. It’s going to be, here and there, you’re going to have matches that you’re just going to win with experience.” 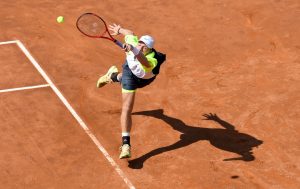 No.12 seed Denis Shapovalov will be Dimitrov’s quarter-final opponent after the Canadian also recovered from a set down to prevail 6-7(5) 6-1 6-4 and oust France’s Ugo Humbert. Shapovalov hit 27 winners in the highly competitive two hours 52 minute affair.

There were also third round wins for Casper Ruud, who upset former US Open champion Marin Cilic 6-2 7-6(6) to set up a last eight clash against No.4 seed Matteo Berrettini in what will be the Norwegian’s first Masters-1000 quarter-final appearance, and Diego Schwartzman. The Argentinian prevailed 3-6 6-2 6-4 over Hubert Hurkacz to reach the quarter-finals at the Foro Italico for the second straight year where he will face either No.2 seed Rafael Nadal or Serbia’s Dusan Lajovic.