Novak Djokovic was crowned champion at the Internazionali BNL d’Italia on Monday, defeating Diego Schwartzman 7-5 6-3 to lift the Italian Open trophy for the fifth time and win a record-breaking 36th Masters-1000 title.

Djokovic won his 35th Masters-1000 title at Cincinnati last month to equal Rafael Nadal’s record for most Masters-1000 crowns and was able to surpass that milestone today when he recorded a straight sets victory over the world No.15.

Today also marked the Serbian’s 287th week as world No.1 and moved him ahead of second-placed Pete Sampras for weeks at the top of the ranking. Only Roger Federer has spent more weeks in the top spot (310).

“I think I had a really good week. I don’t think I played my best tennis, to be honest. I don’t want to sound arrogant here. I’m of course very, very satisfied and pleased and happy to win a title. I know that I still have couple of gears, and hopefully I’ll be able to raise that level for French, because that’s going to be necessary if I want to go deep in the tournament,” said Djokovic.

“But the positive thing is I thought I served very well throughout the tournament and I found my, let’s say, A game when it was most needed in the decisive moments. When I kind of really needed to find a best game, I did.” 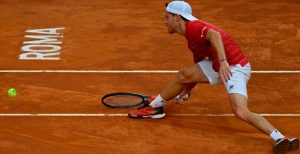 It was Schwartzman who started the match better, performing well in the heavy conditions and capitalising on a disappointing start from the world No.1, who was struggling on his backhand side, to open up a double break lead. A loose service game featuring a couple of second serves and then a double fault allowed Djokovic to recover one of the breaks and get a game on the board as he worked his way back into the match.

The Argentine didn’t appear fatigued following his efforts in overcoming Rafael Nadal and Denis Shapovalov in the previous days, keeping pace with Djokovic in the longer rallies and playing with great variety in what was his first Masters-1000 final.

Djokovic’s level continued to rise as the opening set progressed, he started to find more meaningful first serves and began using the drop shot to great effect. While his backhand improved it was still his weakness, 15 unforced errors flying off that wing in the opening set, but he was too strong for the 28-year-old, seizing the initiative in the 12th game to clinch the opening set in 71 minutes.

The two players traded breaks at the start of the second set as Schwartzman continued to test Djokovic but the No.8 seed couldn’t quite get the better of the 17-time Grand Slam champion. While Djokovic wasn’t playing at his best he found his form in the important moments, recording a decisive break to love in the eighth game and then triumphing moments later thanks to a backhand volley on his third match point. The victory marking his fifth Italian Open title and first since 2015.

“I think today I played a great match in the baseline and I did many good things. The first set, maybe the start of the second, I was on control — not control of the match, but doing what I want to do on court, you know, playing aggressive, playing solid with good movements,” said Schwartzman. “But I think the serve, the conditions today, almost raining, was not helping me to do good serves and have the second ball in a good place.”