Novak Djokovic advanced to his 11th Internazionali BNL d’Italia semi-final after he prevailed in a hard-fought match against qualifier Dominik Koepfer 6-3 4-6 6-3.

It appeared that the two players weren’t going to be on Court Centrale for very long as Djokovic got off to a flyer and raced to a 4-0 lead but as the world No.1’s level dropped and Koepfer’s nerves settled there were glimpses of what could be to come.

The world No.97, who was playing his first Masters-1000 event this week, won three games on the run to get the match back on serve but soon found himself behind again as Djokovic’s forehand, which had done so much damage at the start of the match, started firing again. He broke to 15 and promptly served out the opener. 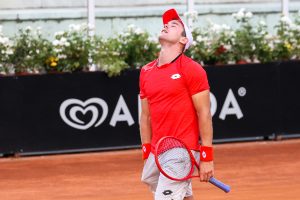 The Serb looked to have the match under control as he led a set and a break but as in the first set the German refused to give up. Digging deep, he raised his level and began to challenge his opponent yet again. Playing impressive tennis the lefthander went toe-to-toe with Djokovic, covering the court magnificently and applying pressure while remaining patient and was rewarded with two breaks of serve and the second set.

It was Djokovic’s turn to regain the momentum in the third set. He had opportunities to break in the opening game and then achieved the feat two games later, breaking to love to establish an early lead and he was never headed. The 17-time Grand Slam champion was solid on serve and started to do damage with his forehand once again as he closed in on the finish line, booking his semi-final spot after two hours 12 minutes.

Standing in his way of a 10th Italian Open final will be Casper Ruud, who edged a tight affair against home favourite Matteo Berrettini earlier in the day to become the first Norwegian player to reach the last four at a Masters-1000 event.

“I feel very welcomed here by people. You don’t see people in the stands, but the people who are part of the organization, from transportation people, volunteers, grounds people, everyone is very kind to me. I happen to speak Italian, so obviously that brings me closer to them,” said Djokovic.

“I feel that probably next to Serbia and maybe China, this is the place where I get the most support and where I get to feel the best, really. The results that I have had in the last 11, 12 years are proving that I’m feeling great. So I am very grateful to all the people that make me feel good, and of course that reflects positively on my game.”