Novak Djokovic prevailed in a gruelling encounter against Kei Nishikori to progress to the last four at the Internazionali BNL d’Italia for the fifth straight year and set up a semi-final clash against Rafael Nadal.

Djokovic had defeated Nishikori with relative ease in Madrid the previous week but it was an entirely different affair at the Foro Italico as the Japanese player pushed his opponent all the way in a bruising 2-6 6-1 6-3 encounter. 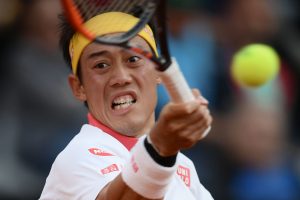 It was Nishikori who showed the initiative in the first set, breaking the Serb’s serve in the nine minute opening game and racing to a 4-1 lead. The world No. 24 was firmly in control and was playing superb tennis, the depth of his shots had Djokovic rattled and the four-time Rome champion had no answer to his aggressive hitting as he claimed the opening set.

After the disappointment of losing the first set, Djokovic stormed back. He upped his level and wrestled back control of the match by winning the first four games of the set. Nishikori appearing subdued as he allowed his opponent to dictate and soon found himself back on level terms in the match as the No. 11 seed took the second set 6-1. 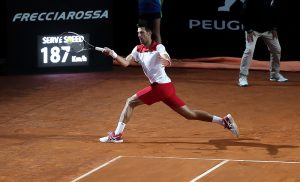 Djokovic continued the momentum in the decider, going up an early break but Nishikori broke back, an effort which seemed to reignite him. With both players showing patches of brilliant play it was impossible to tell which way the match was going to go. Nishikori squandered a break point opportunity when he sent a backhand into the net at 3-2 and then couldn’t prevent Djokovic securing a break in the very next game. More quality tennis followed but Nishikori couldn’t recover the break, eventually succumbing 6-3 in the final set.

“The quality of tennis was really high. I mean, Kei was playing fantastic, especially in the first set; very quick and took me little bit of time to adjust to his pace. Which was very, very quick, as I said,” revealed Djokovic.

“But, you know, I’m really happy that I mentally stayed strong. And in the ending of the third set, you know, really fought and showed some resilience. And this victory means a lot to me on different levels, mostly mental.”

Djokovic will meet Nadal for the 51st time, but the first since 2017 Madrid, when the two take to Court Centrale not before 2.30pm on Saturday afternoon.