Fabio Fognini lit up Court Centrale on Wednesday, thrilling the crowd with a 6-4 1-6 6-3 upset victory over No. 6 seed Dominic Thiem in the second round at the Internazionali BNL d’Italia.

In a performance that was reminiscent of his win over world No. 1 Andy Murray under the lights at the same stage of the tournament last year, the unpredictable Italian displayed his phenomenal talent, holding his nerve in a gripping final set to knock out the Madrid finalist and book a spot in the third round against Peter Gojowczyk. 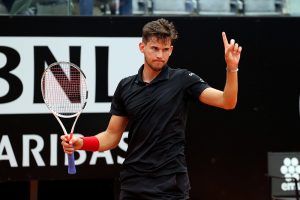 In the opening set the Austrian looked flat and committed too many mistakes. He ironed out most of those errors in the second set, dropping just seven points as he raced to a 5-0 lead and drew the match level shortly after, but Fognini was dialled back in for the third set and an intense battle ensued.

Looking focused and confident in the decider, Fognini’s high level of tennis continuously put his opponent under pressure on serve. Thiem tried to ride the storm, coming through a particularly tough 14-minute service game at 2-3 during which he had to fend off five break points, and had two break points of his own at 3-3.

In Thiem’s next service game the pressure mounted once again as the world No. 21 had him on the ropes at 15-40. The world No. 8 saved one of these break points but couldn’t manage another, relinquishing his serve for 5-3 and prompting an epic racket smash. While his opponent was falling apart, Fognini remained composed and served out the match much to the delight of the Italian fans.

“It was a good match, actually, from both of us, I would say. Was a very intense fight, basically from the beginning to the end,” said Thiem.“So I’m disappointed that I lost, obviously. But game-wise, I’m not really disappointed.”