No. 8 seed Williams, who lifted the trophy in 1999, will be looking to exact revenge on Anett Kontaveit, who defeated her in the first round in Madrid last week, when the two meet in the second match on Court Centrale.

Williams still leads their head-to-head 2-1 and has a clay court victory of her own from 2016 Roland Garros to draw from, but the American will be wary of the 22-year-old Estonian who reached the quarterfinals here last year. 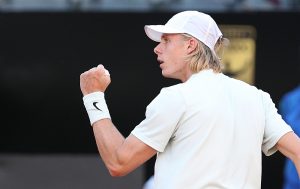 Following Williams and Kontaveit’s match will be world No. 2 Nadal, a seven-time titlist at the Foro Italico, who faces the exciting young prospect Denis Shapovalov, who reached the semifinals in Madrid last week, for a place in the quarterfinals.

Spain’s Albert Ramos-Vinolas stands in four-time champion Djokovic’s way of a first ATP quarterfinal of 2018 in the opening match of the Court Centrale night session, while Maria Sharapova, who has triumphed here on three occasions, will play either No. 3 seed Garbine Muguruza or Daria Gavrilova on Next Gen Arena.

Other enticing matches on Thursday include world No. 1 Simona Halep versus Madison Keys and Juan Martin del Potro against David Goffin, which both take place on Court Pietrangeli, and Dominic Thiem’s conqueror Fabio Fognini against Peter Gojowczyk in the first match of the day on Court Centrale.