Daria Gavrilova fought back from a set to down to defeat No. 7 seed Svetlana Kuznetsova 26 75 64 and claim her first top 10 victory of the year at the Internazionali BNL d’Italia on Thursday. 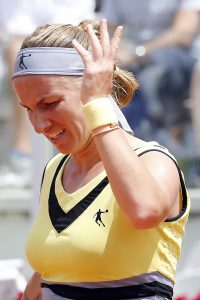 Gavrilova has previous form in Rome, having reached the semifinals on her Foro Italico debut in 2015, and her victory over Kuznetsova marked her fifth triumph of the week if you include her two qualifier wins. The world No. 33 was forced to contest qualifying after she forgot to sign up in time to the main draw.

Kuznetsova, who was a semifinalist in Madrid last week, produced a clinical first set to take an early lead but Gavrilova regrouped and built in confidence as the match progressed, eventually securing the upset victory in two hours 23 minutes.

The Australian will face No. 15 seed Kiki Bertens, who took out Ekaterina Makarova 76(3) 61, in Friday’s quarterfinal.