David Goffin recorded just his tenth victory of the year when he defeated Stan Wawrinka 4-6 6-0 6-2 in a topsy turvy match at the Internazionali BNL d’Italia.

It was Wawrinka, the 2008 finalist, who started the opening match on Grandstand as the more dominant player, serving well, limiting the rallies and piling the pressure on his opponent in his service games. The pressure finally resulted in a break of serve in favour of the Swiss player and gave him the opportunity to serve for the opening set but Goffin immediately recovered the break to prolong the set just a little bit longer. A third straight break of serve ensued in the 10th game – two double faults contributing to the Belgian’s downfall – to hand Wawrinka the first set 6-4.

Goffin needed to start the second set well and he did, breaking the world No. 29 in the opening game to give him the edge. From then on confidence in his groundstrokes grew and his level improved as Wawrinka appeared sluggish and disinterested and eventually lost the set 6-0.

Wawrinka managed to hold in the first game of the second set and some better tennis ensued but it wasn’t long before Goffin took the lead, breaking in the third game thanks to some crafty drop shots. By now the Belgian was moving well and paying some sublime tennis while the errors from Wawrinka’s racket were mounting. The three-time Grand Slam champion – a quarter-finalist in Madrid last week – was unable to turn his fortunes around, exiting in the first round for the second straight year.

Victories haven’t been forthcoming for Goffin so far in 2019 but this one will hopefully serve as a turning point for his season. Up next for him will be No. 7 seed Juan Martin Del Potro. 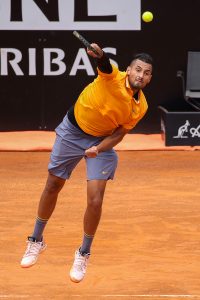 Nick Kyrgios used underarm serves, tweeners and drop shots to help him to a 6-3 3-6 6-3 victory over No. 12 seed Daniil Medvedev. The Australian, who reached the third round here last year, then finished the match by firing down four straight aces.

“Today I knew it was going to be tough. Medvedev is an unbelievable player. He’s had a great year. Last year he played really well. I knew today was going to be very tough because I haven’t played much on the clay,” said Kyrgios, who will play qualifier Casper Ruud in the second round.

“I just tried to serve really big. I tried to dictate as much as I could. A lot of dropshots. I was trying to throw him off his game because I knew he loves rhythm. He’s a great player.”