Simona Halep displayed near flawless tennis as she demolished Naomi Osaka 61 60 in 59 minutes in her opening round match on Court Pietrangeli at the International BNL d’Italia. 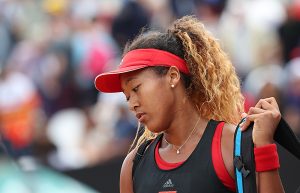 The world No. 1 won 12 games in a row to ease past the Japanese player, who had beaten her in straight sets on her way to the title at Indian Wells in March, and set up a third round meeting with Madison Keys or Donna Vekic.

Osaka started the match with a comfortable hold and then pushed Halep all the way in her opening service game, which lasted eight minutes and required the Romanian to fend off four break points. With Osaka’s forehand firing and Halep finding her range with her groundstrokes it looked like an intense battle was developing but this level of tennis was short-lived.

Halep broke in the third game of the match and never looked back, tearing through her opponent with some excellent shot placement and powerful hitting. The 20-year-old looked visibly dejected as she struggled with her backhand and then missed an easy volley on break point in the second set. Halep remained relentless, recording 15 winners to Osaka’s 10 and limiting her unforced errors to 14 compared with Osaka’s 29, as she took a step closer to her first Rome title.

“I think that game was really important. I thought about it, that I have to win it. Because if she takes 2-0 lead, it’s a little bit more difficult,” said Halep, who needs to reach the quarterfinals this week and stay one round ahead of Caroline Wozniacki to keep the No. 1 ranking. “And then at 3-1, I felt that I’m a little bit ahead. And I just relaxed myself, and I opened the court much better.” 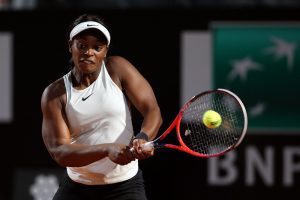 No. 7 seed Caroline Garcia got her 2018 Internazionali BNL d’Italia campaign underway with a straightforward 6-3 6-4 victory over Timea Babos, and will now play Sloane Stephens, who was extended to three sets against qualifier Kaia Kanepi, in the third round.

The American No. 9 seed looked to be cruising to victory at 6-0 2-0 but the two-time Roland Garros quarterfinalist fought back to take the second set before Stephens clinched a 6-0 5-7 6-4 win.

“Obviously, when you play someone and they beat you 6-love they, most of the time, are going to start playing better in the second set. And that’s what she did,” said the US Open champion.
“There was a couple loose points that I played and I could have done some things different. But I regrouped nicely for the third set, so I was happy with that.”