Simona Halep was in sublime form as she raced to a 62 64 victory over qualifier Anett Kontaviet in the first quarterfinal at the Internazionali BNL d’Italia on Friday.

The Romanian shot to a 3-0 lead in the opener before Kontaviet was able to recover one of the breaks and get a game on the board. Halep remained in control however, bossing her opponent from the baseline and blitzing her way to the first set. 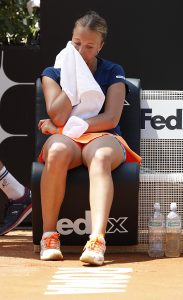 Halep opened the second set in the same vein as the first, with a break in the opening game, however Kontaveit wasn’t going to be tamed that easily and broke straight back. That was the Estonian’s last game until a couple of loose errors from Halep at 4-1 allowed her back into the match. The world No. 68 battled hard from the baseline to make the second set a more competitive affair but ultimately however, the Madrid champion proved too strong, completing the victory in 80 minutes.

“Today was a good match, but I can say that I could finish earlier in the second set. But I’m missed that short ball. It was so bad. I went a little bit down,” said Halep. “But she turn it a little bit around. She came stronger. She came back for few games, and she played really, really well.”

It was Halep’s ninth straight match-win and sets up a semifinal against No. 15 seed Kiki Bertens, who outplayed qualifier Daria Gavrilova 63 63 in one hour 27 minutes.

The Dutchwoman, who was a semifinalist at Roland Garros last year, showed all her clay court prowess as she ran out a comfortable winner over Gavrilova. The Australian looked to have run out of steam following a successful week which had seen four of her five matches be extended to three sets.