Italian trio advance on day one in Rome

Fabio Fognini recorded a comfortable 63 61 victory over Gael Monfils in Monday’s opening night match at the Internazionali BNL d’Italia to join compatriots Matteo Berrettini and Marco Cecchinato in the second round.

It was a surprisingly straightforward evening for Fognini who wrapped up victory in 53 minutes to move through to round two where he will face No. 6 seed Dominic Thiem.

Monfils appeared flat and out of sorts throughout the match, struggling to find any kind of consistency on his shots and lacking any firepower. He spent some time stretching out his shoulder following a tumble early in the first set but didn’t seem unduly troubled, just unable to find a level to worry the Italian.

By contrast Fognini played consistently well and had little to complain about on the cool, cloudy evening at the Foro Italico. He broke at 3-3 in the opening set when the Frenchman sent an inside out forehand wide, consolidating the break to love before breaking again to take a 6-3 lead. It remained one way traffic in the second as Fognini injected further pace into his shots, knowing Monfils had no answer. 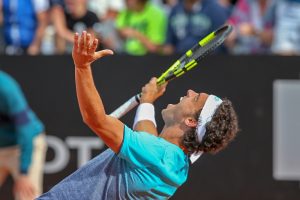 Rome-native Berrettini, the world No. 103, booked his spot in the second round of a Masters 1000 event for the first time with a 63 76(1) victory over Frances Tiafoe on Court Pietrangeli, while fellow wild card Cecchinato came back from a set down to defeat former world No. 19 Pablo Cuevas 26 75 64 on the same court.

It was a disappointing day for Italy’s women as all three exited at the first round stage. Francesca Schaivone was upended by Dominika Cibulkova 61 67(5) 62 on Next Gen Arena, youngster Camilla Rostatello won just three games in her match against qualifier Kaia Kanepi, while Roberta Vinci’s career came to an end against Aleksandra Krunic in front of a packed crowd on Court Pietrangeli.