Dominik Koepfer emerged victorious in the battle of the qualifiers as he eased past Lorenzo Musetti 6-4 6-0 to secure his first Masters-1000 quarter-final berth at the Internazionali BNL d’Italia.

It has been a dream week for the German who saved a match point on his way to upsetting Alex de Minaur and recorded his first Top 10 victory when he defeated No.5 seed Gael Monfils in the opening two rounds before ending Musetti’s impressive run on Court Pietrangeli on Friday. Next up for the world No.97 will be a last eight clash against world No.1 Novak Djokovic. 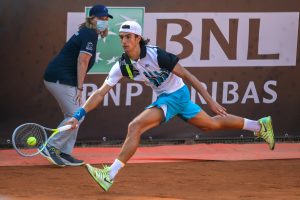 The lefthander produced some solid serving and showed great variety in his game as he made lightwork of the world No.249, claiming the first set with a single break.

Musetti, the 18-year-old Italian who had upset three-time Grand Slam champion Stan Wawrinka and former world No.4 Kei Nishikori in his first and second round matches, suffered from a shoulder injury at the end of the opener and was unable to play at his best. Hampered on serve he failed to win a game in the second set, falling to a straight sets defeat in 68 minutes.

“I was maybe tired, like I played a lot of matches during this week. And also I had a little problem with the shoulder so I couldn’t like have the power that I had in these days but for sure I’m taking away great experience. I think next week or in the next week I will play with more trust in my weapons and in myself, so this is what I’m taking away from this tournament,” said Musetti.