Birthday girl Johanna Konta had plenty to celebrate on Friday at the Internazionali BNL d’Italia after she got the better of Marketa Vondrousova to reach the semi-finals.

The Brit, who turned 28 on Friday, is not renowned for her prowess on clay but is enjoying a successful season on the red dirt with at least a semi-final showing in the Italian capital and a runner-up finish at Rabat earlier this month.

“I knew going into the match that Marketa, she’s very comfortable in long rallies and getting balls back. I knew she has the ability to really be able to read the game and make things quite tricky. I definitely was looking to really exercise patience and just also try to build my points, really trust what I was doing out there, and enjoy trying to find a solution to the different problems that she brings, which she brings many,” said Konta.

“She’s very talented and really gifted in the way she plays. I was just pleased that I was able to do that and also raise my level a little in the third set because it was pretty even, especially in the games. I lost to her once before, so I was under no false illusion going into the match.” 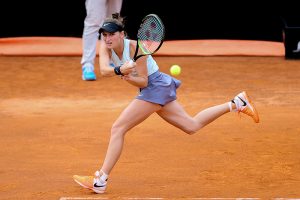 Konta appeared the fresher of the two players in her quarter-final match-up against Vondrousova, who had upset No. 3 seed Simona Halep and been extended to three sets against Daria Kasatkina on Thursday. The world No. 42 served strongly, used the dropshot to great effect and fired plenty of winners off her backhand side as she eased to a 6-3 first set.

Signs of fatigue from the Czech player appeared to abate in the second set as she pummelled her groundstrokes, increased her first serve percentage and began to read her opponent’s game better. Konta was made to pay for some wayward groundstrokes as the teenager secured a double break and sent the match to a decider.

Vondrousova’s momentum remained at the start of the third set and she held a break point in the second game, only for it to be saved by a backhand winner. That challenge proved to be the world No.44’s last of the match as Konta rediscovered her range and regained control of the match, winning the final six games to claim a 6-3 3-6 6-1 victory and set up a semi-final meeting with Kiki Bertens.

Madrid champion Bertens received a walkover into the final four when top seed Naomi Osaka withdrew from the tournament with a right hand injury.