No. 3 seed Garbine Muguruza was knocked out of the International BNL d’Italia by Daria Gavrilova in a marathon late night match on Court Centrale. 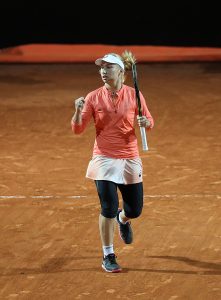 In a topsy turvy match full of momentum changes, it was the Australian who led 4-2 in the opening set before the Spaniard recovered the break and then won three games in a row to take the first set. Gavrilova regrouped and edged 3-0 ahead in the second, saving seven break points in a 12-minute game to take a 5-2 lead, before closing out the set and levelling the match.

Despite looking weary the world No. 24 then battled back from 0-4 down in the final set and saved two match points on her way to a 5-7 6-2 7-6(6) victory which lasted three hours and nine minutes and finished after 2am on Thursday morning.

It was Gavrilova’s fourth career Top 5 victory and sets up a third round encounter against Maria Sharapova.