“Today is a day to enjoy this title. For me, it means a lot to win in Rome here again,” said Nadal. 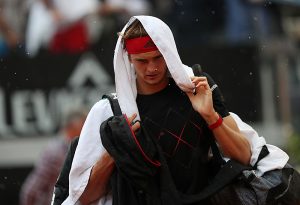 It was the German who started better, winning the first three points of the match and breaking Nadal in his opening service game. This served as a wake up call for the Spaniard who broke back to love in the next game and then went on a tear, winning the next five games with some ruthless tennis to claim the opening set in 33 minutes.

Zverev was playing good tennis but simply didn’t know what to do to combat Nadal’s brutal hitting. The Spaniard was firmly in control and the No. 2 seed looked tired as he struggled to find the answers.

“I played one of the best sets that I played on clay this year. First set was fantastic, in my opinion, in terms of everything. Feeling, good shots, tactically — everything was, in my opinion great in the first set, no. Returning great. All the things that I wanted to do happened. So, it was a great set,” said Nadal, who is set to return to No. 1 in the rankings on Monday following this victory.

The second set saw a change in fortunes. Zverev produced an impressive drop shot to bring up game point and then recorded an important hold in the opening game. It looked as if a mini momentum shift was on the cards as the German raced to 15-40 in the next game and it was as Nadal sent a backhand into the net to give Zverev the break.

Zverev was serving better and playing more aggressive while Nadal’s level had dropped. The errors started mounting up and the defending champion capitalised, moving to a 5-0 lead before Nadal got his first game of the set and then levelling the match with a backhand winner. 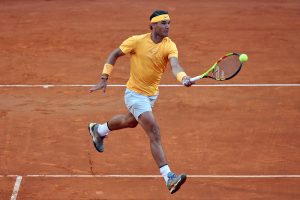 The world No. 2 hadn’t lifted the trophy at the Foro Italico since 2013 and it looked like that drought was set to continue as Zverev moved 3-1 up in the third. Nadal had faced just eight break points throughout the whole tournament but was up against 11 in the final alone.

However, a pair of rain delays at 2-3 gave Nadal time to reflect and he returned to the court rejuvenated. Raising his game and changing his tactics, he immediately broke back, simply refusing to miss and forcing Zverev to come up with the goods.

“When it happened, delay, the rain delay, I didn’t feel in that moment that it would help me. That’s my feelings.It’s true that, if we analyze now, of course, we can say that the rain delay helps, helped me,” continued Nadal. “But really, in my opinion, what helped me is that I came back with a clear idea in terms of tactical issues and in terms of decisions that I take after that break. And after that, yeah, the break for the rain.”

Zverev was still playing extremely well and had done all he could to capitalise when Nadal’s level was low but once the Spaniard returned after the rain delay he was just too good. Zverev didn’t win another game as Nadal raced to the finish line, securing a pair of breaks in the process to win his first title in Rome since 2013 in two hours nine minutes.

“[The rain] it just changed momentum. I was — you know, the momentum was on my side.And Rafa is somebody that if you’re not in the match and if you’re not feeling the ball well, you have no chance,” said Zverev, who had won 13 straight games on clay prior to Sunday’s final.