World No. 2 Rafael Nadal produced a commanding performance to dispatch of Canadian youngster Denis Shapovalov 6-4 6-1 and move into the quarterfinals where he will face Fabio Fognini.

With Nadal’s serve firing and his forehand dominating from the back of the court, there was little the 19-year-old could do to trouble the Spaniard at the Foro Italico. Shapovalov grew frustrated as he failed to find a way through the Nadal defence but put up a respectable display throughout the 82-minute encounter. 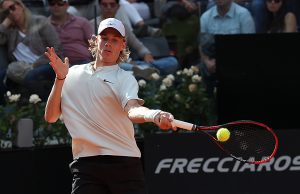 The Canadian held serve until 3-3 in the opening set despite facing eight break points in his first two service games, finally relinquishing his serve following a forehand error. Just one break of serve sealed his fate in an opening set where Nadal dropped just one point on serve in his first four service games.

The seven-time Rome champion broke early in the second set and soon found himself 4-1 up with a double break as the Canadian’s challenge waned. The Next Gen player wasn’t to win another service game as Nadal closed the match out and recorded his first victory over the world No. 29.

“It was a solid match for me,” said Nadal. “I started with some mistakes on the return. Because with my serve, I didn’t lose many points. But on the return at the beginning, I really think that he was serving big. And I had couple of mistakes with the return, so it takes a while to have the break.”