The first set of their 51st meeting was reminiscent of old, with both players producing an incredibly high level of tennis in an intense and physical battle which lasted 71 minutes. 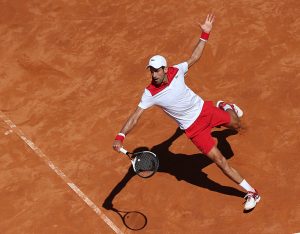 Djokovic held two break points in the opening game but it was Nadal who got the first break on the board for 4-2 after some heavy hitting. While the Serb was playing well from the outset, he was able to rein in his unforced errors as the set progressed ensuring the level intensified.

In the ninth game the No. 11 seed forced an error from Nadal by keeping good depth on his forehand to help him break back. He held on his next service game to make it three games on the trot and shortly afterwards the two players were embroiled in a tiebreak.

The first three points went against serve before a Nadal smash edged him ahead to 3-1. Djokovic became frustrated as he struggled to impose his game, Nadal forcing him back and changing the pace. Djokovic remained in touch but a couple of winners from the seven-time champion saw him over the line.

Djokovic was unable to match the world No. 2’s intensity in the second set and the Spaniard made him pay for a weak game at 2-1 to obtain the break. From then on Djokovic struggled to believe he could turn it around, he threw everything at Nadal, earning two break point in a nine-minute game at 4-3 but Nadal proved too tough.

A loose backhand at 5-3 brought up two match points and while the 12-time Grand Slam champion staved off one with a backhand volley, a backhand winner up the line from Nadal clinched the match in one hour, 56 minutes.

“Well, of course, was a good match. Difference was few points. In the first set, it’s true that I was in advantage. He played a good game, no mistakes,” explained Nadal. “And then the match become very — very close. And I think I played with the right determination. The important moments later, in the tiebreak. I think I played aggressive with my forehand.

“And then in the second set, in some important moments, too, was the key. I was able to change the rhythm of the point, combining high balls with shots down the line with my forehand.”

Nadal will bid for an eighth title at the Foro Italico against either No. 2 seed Alexander Zverev or No. 4 seed Marin Cilic, who meet in Saturday’s night match. Victory for Nadal on Sunday will ensure he returns to the No. 1 ranking on Monday.

As Djokovic continues his comeback from injury he has plenty of positives to take away from this week at the Foro Italico.

“Rafa was just better in important moments. He just managed to play right shots. And he deserved to win. He was the better player,” said Djokovic.

“I don’t think that there was too much of a difference, which is great for me, great news for me. Because Rafa is, of course, the best player ever to play tennis on clay courts. And, you know, he’s in great, great form; and it’s very difficult to play him on clay anywhere.”