Nadal, Thiem to meet yet again

Rafael Nadal remained unbeaten on clay in 2017 when he saw off Jack Sock 63 64 in the opening night match at the Internazionali BNL d’Italia on Thursday. While the first set was pretty straightforward for the 14-time Grand Slam champion, the American put up a spirited challenge in the second.

“He’s a tough opponent. He hit the ball with big spin and so hard,” said the No. 4 seed. “Yeah, I think I started the match well. Then in the second set again. But he played some good points. I didn’t serve well with the 1-0, and then I had some tough moments few games after he break me back in the second.

“But later I think I finished playing a more aggressive game and serving much better, no? At the end of the match, I think my serve worked much better, so that’s important for me.” 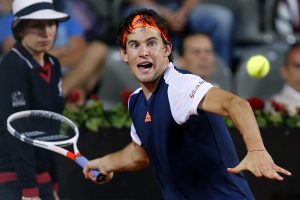 The Madrid Open champion has won all 17 of his matches on the surface this season and will be favourite in his quarterfinal match against Dominic Thiem, a player he has defeated twice in the past three weeks.

The Spaniard got the better of Thiem without the loss of a set in both the Barcelona and Madrid Open finals and will look to continue his impressive form against the Austrian as he bids for an eighth title at the Foro Italico.

Thiem saved three match points as he squeaked past Sam Querrey 36 63 76(7) to reach the quarterfinals in Rome for the second straight year. A single break of serve decided the first two sets before a tight third set was resolved by some brave hitting in the tiebreak.

“It was very tough. He played a very good match. I think he’s not the biggest clay court specialist, but today he really played well. Yeah, again, I saved match points, so it could easily go the other way,” said the No. 8 seed.

“He really played a good match from the start to the end, basically. So I’m happy that I beat today a very tough opponent.”