Kei Nishikori overcame Feliciano Lopez in an entertaining battle in the first match on Court Centrale at the International BNL d’Italia on Monday. The Japanese player needed one hour 48 minutes to overcome the Spanish lefthander 76(5) 64 and set up a second round clash with No. 3 seed Grigor Dimitrov.

“It wasn’t easy match. It was windy. And, also, he used a lot of slice and great serves,” said Nishikori. “I think first set can be — can go both ways. I think he was playing good tennis, too. Yeah. I mean, luckily I got first set. And after that, I was more confident and I was playing better tennis.” 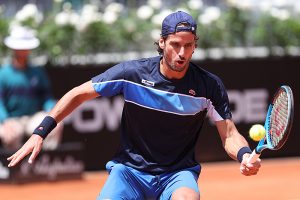 It was a close affair from the outset with both players exhibiting some quality shotmaking – Nishikori showcasing his traditional explosive tennis while Lopez thrilled the crowd with some wonderful deft touches at the net.

The first set went with serve, despite Nishikori holding a set point in a marathon 12th game, and it was fitting that the tight encounter was decided by a tiebreak. A topsy-turvy breaker containing nine mini-breaks ensued, but it was the Japanese player who was mentally tougher in the crucial moments and secured the set after one hour three minutes.

Momentum remained with Nishikori at the start of the second set as he broke Lopez in the opening game. While Lopez regained his composure and broke back for 3-3 it wasn’t long before Nishikori had his nose in front once again and ultimately served out the match to love.

For Lopez it marked the sixth time in the past seven years that he has fallen in the first round at the Foro Italico, while it was a welcome victory for Nishikori, who hadn’t won a match since  reaching the Monte Carlo Masters final last month.