Kei Nishikori came back from a set and a break down to outlast Grigor Dimitrov 6-7(4) 7-5 6-4 on Next Gen Arena at the Internazionali BNL d’Italia on Wednesday. 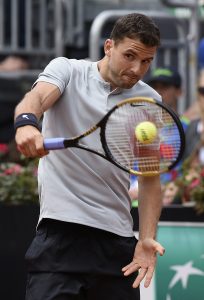 The world No. 24 had been struggling with a wrist injury of late and hadn’t won a match since he reached the final at the Monte Carlo Masters last month but he looked in fine form as he ended the Bulgarian’s hopes at the Foro Italico.

Nishikori got the first break of the match in the fifth game and served for the first set at 5-4 but Dimitrov won eight consecutive points to break back and a tiebreak ensued. The Japanese player led in the tiebreak too, but it was the No. 3 seed who came away with it, edging ahead when Nishikori sent a backhand into the net.

The two exchanged breaks in the second set before Nishikori clinched it at 6-5 on his third set point. Dimitrov, who was celebrating his 27th birthday, moved ahead in the decider too, leading 4-2 but a run of four games by his opponent saw him triumph in a two hour 54 minute thriller.

Nishikori will face Philipp Kohlschreiber, who took out No. 13 seed Jack Sock 6-4 6-3 on Tuesday, in the third round.

Marin Cilic and Ryan Harrison returned to the court to complete their rain-affected encounter on Wednesday afternoon with their match delicately poised at 3-3 in the first set tiebreak.

It was Harrison who came out firing and won the next four points to claim the first set and an early lead. Once he got going though it was the Croatian who was the player to beat, racing through the second set to force a decider.

The third set was more of a battle but it was the No. 4 seed who proved the more consistent player and who held his nerve in the final set tiebreak. The American grew frustrated as his opponent took a 5-0 lead, etching a point on the board before Cilic claimed a 6-7(3) 6-1 7-6(1) win. 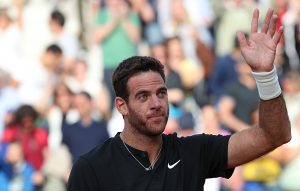 Juan Martin del Potro had his hands full in the first set in his match against Next Gen player Stefanos Tsitsipas. The Argentinian broke in the final game of the one-hour-six-minute-set to take the lead but it was an intense opener which could have gone either way.

With the first set under his belt the 2009 US Open champion was on the front foot, monopolising the court and consequently he became the more dominant player, securing a 7-5 6-3 win and setting up a last 16 encounter against No. 9 seed David Goffin.

“I think we both are feeling good, we are fit, we are free of pain. And it’s gonna be a really tough one for me. I mean, David has a great game, and he could be in the final on this tournament and every tournament,” said del Potro. “And it will be a big challenge, and I will try to play even better than today.”