Osaka eases past Azarenka, Konta and Keys also through

Naomi Osaka made light work of Victoria Azarenka, dropping just three games against the former world No. 1 to record her first victory at the Internazionali BNL d’Italia and book a second round meeting with Simona Halep.

Much had been expected from the clash between the two players but the encounter failed to live up to expectations primarily due to the 20-year-old’s inspired groundstrokes which continually overpowered her Belarusian opponent.

“I wasn’t really thinking much after I won the first game. I just really tried to keep the momentum going. And I was really glad that I was able to finish it at that score line,” said Osaka. 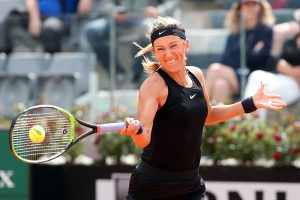 The Japanese player allowed the former world No. 1 just seven points in the first five games, shooting to a 5-0 lead in 16 minutes. Moments later the bagel was complete and Osaka seemed to be firmly in control of the match.

Azarenka, who reached the final at the Foro Italico in 2013, showed the kind of battling qualities that took her to two Grand Slam titles at the start of the second set, breaking to lead 2-0. Her advantage was shortlived however as Osaka upped her game to combat the greater depth Azarenka was putting on her shots. The 2018 Indian Wells champion continued to hit winners from the back of the court eventually running out victorious 60 63 in one hour 13 minutes.

Joining Osaka in the second round is Brit Johanna Konta, who defeated Magdalena Rybarikova for the second time in as many weeks 64 63 on Court Pietrangeli. The world No. 22 came back from a break down in each set to book a second round meeting with either Hsieh Su-Wei or Aryna Sabalenka.