Jelena Ostapenko will make her first appearance in the quarterfinals at the Internazionali BNL d’Italia after she secured a 2-6 6-3 6-4 victory over birthday girl Johanna Konta in the first match on Court Pietrangeli on Thursday.

It was the Briton who was in impressive form early on, playing aggressive tennis to break twice and race to win the first set as her opponent complained of dizziness. The second set was an entirely different affair as the reigning Roland Garros champion began to find her feet and hit some ferocious winners – 14 in total – on her way to levelling the match.

Ostapenko carried the momentum into the third set and broke at the earliest opportunity. While the world No. 22 stayed close she was under increasing pressure in each of her service games and was struggling to keep pace with the Latvian’s groundstrokes. Konta battled her way to break point in the eighth game, an opportunity which was saved by a service winner, and ultimately had no answer to a forehand winner on match point as Ostapenko claimed victory after two hours 13 minutes. 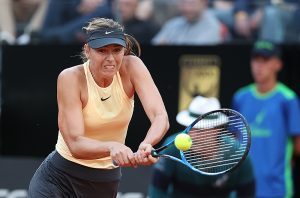 The No. 6 seed’s next opponent will be three-time champion Maria Sharapova, who hit 38 winners in her one hour 38 minute victory over Daria Gavrilova.

Some excellent serving and crafty drop shots helped the Russian to a 5-1 lead in the opening set and despite suffering a dip in form, which allowed the world No. 24 to recover one of the breaks, she held on to take it 6-3.

The Australian started better in the second set, immediately going a break up before Sharapova went on a run, claiming the next four games to lead 4-2. The two players then exchanged multiple breaks of serve as the contest moved towards its climax, which saw Sharapova clinch it on her third match point.