No. 2 seed Karolina Pliskova produced a dominant display of tennis to defeat Lauren Davis 61 61 in 57 minutes in her opening match at the Internazionali BNL d’Italia.

The American, who defeated Carla Suarez Navarro in the first round, had no answer to Pliskova’s power and struggled to get a foothold in the match.

“So far I think was the easiest match even in this year,” said Pliskova. “I think I played pretty fast and pretty aggressive today. There were two or three games really close, which made the difference. Could be maybe a little bit different if I would have losed. Happy that I won it and was easy like this.”

It was a first victory at the Foro Italico for the Czech player who had failed to advance beyond the first round on her previous two visits to Rome. She will play Timea Bacsinszky, who overcame No. 14 seed Barbora Strycova 64 62 on Court 2, in the next round. 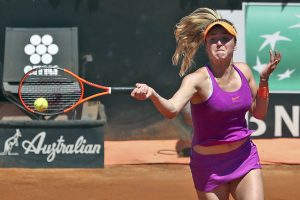 No. 8 seed Elina Svitolina battled past Alize Cornet 64 76(11) to set up a third round clash against qualifier Mona Barthel, who defeated fellow qualifier Wang Qiang 63 64, while 1999 Italian Open champion Venus Williams came through a tough baseline duel against Lesia Tsurenko 64 63 and will now face Johanna Konta for a quarterfinal place.

Bertens’ doubles partner Julia Goerges was also victorious on day four in Rome. She fought back from a set down to defeat two-time champion Jelena Jankovic 26 76(2) 61 in two hours 19 minutes.