Karolina Pliskova powered past Johanna Konta 6-3 6-4 to win the title at the Internazionali BNL d’Italia for the first time.

The No. 4 seed was just too consistent for her opponent, hitting 21 winners and committing only 14 unforced errors as she wrapped up victory in one hour 25 minutes and became the first Czech woman to lift the Italian Open trophy since Regina Marsikova in 1978.

“It feels great, especially nobody really gave me chance for this tournament. Even I think me. Before the tournament, I was not super confident, not thinking about the final at all. I was just happy with every match which I played,” said Pliskova.

“So it’s little bit like a miracle for me because clay, this tournament, since I didn’t play well here, and on clay it’s always tough. I played some good clay court girls. Of course, super happy.”

Pliskova played flawless tennis in the first set, serving at 86%, attacking her returns and only missing two first serves as she built up a 5-2 lead. She suffered a slight blip as the pressure increased as she served for the set, missing two more first serves and allowing Konta her first break point of the match. The Brit couldn’t take her opportunity however and was left frustrated as what looked like a certain winner bounced off the top of the net and went wide. 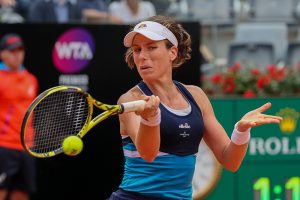 The second set was a closer affair but while Konta was able to hold firm on her early service games she was unable to put her opponent under much stress on hers. The world No. 42 managed to get to :30 on a couple of occasions and to deuce in the eighth game but Pliskova wouldn’t let her get nearer than that, some clutch serving ending any hopes Konta may have had of breaking. In the end it was the marathon seventh game which made the difference, Pliskova putting a forehand volley into the corner on her fourth break point to take the lead and holding to serve out the match three games later.

It was a 13th career title for the Czech and her second on clay and will see her climb to No. 2 in the rankings on Monday.

“I mean, it’s always tough playing Karolina. There’s rarely really a rhythm to the match. She plays with big shots, quite flat, and big serves. It can feel sometimes you’re fighting an uphill battle. That was the case today,” said Konta.

“I just thought she didn’t really have a letdown throughout the match. She played very consistently. I found it quite hard to get a footing into the match, which is credit to her. But equally I thought I actually did the best I could really. I didn’t do too much wrong today, so… Yeah, it’s disappointing. Obviously I would have loved to have won the title. I also have a lot to be proud of this week.”