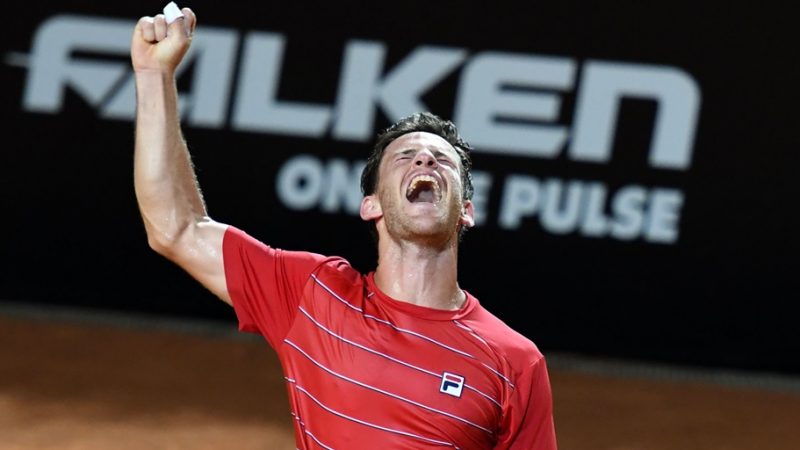 Schwartzman triumphs over Shapovalov in epic

Diego Schwartzman advanced to his first Masters-1000 final after edging Denis Shapovalov 6-4 5-7 7-6(4) in an outstanding semi-final contest at the Internazionali BNL d’Italia.

The mesmerising three-set encounter, which lasted three hours 15 minutes, was full of twists and turns, brutal long rallies and staggering points as the two players pushed each other to their mental and physical limits.

The world No.14 hit 49 winners, compared to 27 for his opponent, as he displayed his trademark firepower and athleticism while Schwartzman kept making his opponent hit that extra shot and was more mentally tough when it mattered most.

The match featured 12 breaks of serve, numerous momentum shifts and huge amounts of resilience. A third set tiebreak – which featured eight mini breaks – was required to decide a winner and it was the Argentinian who came out on top, grinding it out at the end to claim victory and book a final date with world No.1 Novak Djokovic.

“Well, today was a difficult match. Denis was playing very good tennis, aggressive tennis. At the end maybe the third set we were playing for many things: for the final, for the top 10, for the match, for — you know, the nerves were there. It was difficult,” said Schwartzman.

The result leaves the No.8 seed on the cusp of a first Top 10 ranking – if he lifts the trophy on Monday he will achieve the feat, if he loses in the final Shapovalov will climb into the Top 10 for the first time.

Schwartzman had caused a huge upset on Saturday evening when he stunned nine-time Rome champion Rafael Nadal in straight sets but he suffered no hangover from that victory, appearing indefatigable as he kept pace with the lefthander and recovering from a break down three times in the final set.

The Canadian has played an enormous amount of tennis recently after reaching the quarter-finals in both singles and doubles at the US Open earlier this month and received treatment on his hamstring on Court Centrale after winning the second set but he wasn’t hampered and hung in until the very end, his 58th unforced error –  a backhand into the net – ending his run in Rome.

“I don’t know if there was a key. We were both playing at very even tennis off the back, and it was just a couple points. I think it was a great match from both of us. I feel like we both deserved to win today, so I don’t think there was any keys or anything. It was just a couple of points that made the difference,” said Shapovalov who won 112 points in the match compared to 113 for Schwartzman.